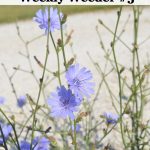 Welcome to the Weekly Weeder series. Today's featured plant is chicory, Chicorium intybus. The wild and domesticated varieties of chicory have a long history of use for food and medicine, and as a forage crop for livestock.

Chicory is prized for its long taproot, which is roasted and used as a coffee substitute or coffee additive. The roots are also high in inulin, which is used as a sweetener and prebiotic. The plant contains compounds such as flavonoids and coumarins that may help fight disease.

Chicory is a perennial plant that has a basal rosette with long, toothed leaves similar to a dandelion (thus the name “blue dandelion”). It grows 1-4′ tall, with ground level leaves that are 3-6″ long. The leaves that alternate up the flower stalk are much shorter, 1/2 – 1″ long, and wrap around the stem.

The plants have a long taproot that can punch through some of the toughest soils. The domesticated varieties have a thicker, more substantial root, something like a sugar beet. (The domesticated plants are cultivated and harvested much like sugar beets.)

The roots of some varieties of domesticated chicory (Witloof chicory) are forced to produce a vegetable known as Belgian or French Endive.

Bloom time is summer and fall, from July through October. Chicory flowers are roughly 1.5 ” across with up to 20 petals. They open in the morning and close by early afternoon. Each petal is tipped with a tiny bit of fringe, like a scarf. Flower color ranges from white to pink, but in our area I have only seen blue..

When chicory flowers, it shoots up a long stem with multiple blossoms that open one at a time and last only one day. Although not as striking as some flower displays, thick clumps of chicory still make a lovely splash of blue in the countryside. The flowers don't smell like much. When my great niece and I went out to smell them, she said, “It smells like barnyard”. Yes, perhaps a bit, but the odor is faint.

You probably don't want to let the flowers go to seed in large numbers in areas where you frequent. They produce hooked seeds that latch onto clothing, somewhat like burdock burrs. These seeds are oblong, flat and about 1/4 inch long. I once let a large patch of them go to seed on our rock wall at our old place (the flowers were so beautiful!), and that was a mess.

Where Does Chicory Grow?

Chicory is believed to have originated in Europe, but is now common in North America, China and Australia. Around here, chicory grows in large clumps and is common along country roads, combining with birdsfoot trefoil to paint the countryside with bold swaths of blue and yellow. Its long taproot punches down through clay, gravel and compacted soils, thriving in rough conditions. The USDA range map shows that is common throughout the United States.

The article “Studies on Industrial Importance and Medicinal Value of Chicory Plant” lists a wide array of studies noting the use of chicory for digestive issues, heart disease, as an anti-thrombotic and anticorcinogenic, to reduce arthritis pain, to reduce constipation, as an immune system booster and promoter of kidney health. Most of the featured studies focus on chicory root extract, but drinking chicory root tea or coffee or consuming chicory may also have some positive impact on these conditions. The list below highlights some of the medicinal uses of chicory.

Note: As mentioned above, most chicory studies focus on chicory root extracts or compounds that could be measured and replicated in lab experiments. Chicory may be helpful for the listed conditions, but you should always consult a trained healthcare provider, especially in the case of serious illness.

Acts as a Prebiotic

The inulin in chicory acts as a prebiotic, supporting the growth of healthy bacteria in the gut. Specifically, chicory promotes the growth bifidobacteria. These probiotic bacteria are found in cultured foods such as yogurt and cheese.

May Improve Bowel Movements and Delay or Prevent Diabetes

Chicory root extract may help you poop better and delay or prevent the onset of diabetes.

A 1999 study examined the growth of cancer tissue in mice and found that those mice placed on a diet consisting of 15% oligofructose, inulin or pectin reduced tumor growth. The control group was fed only starch as their carbohydrate.

Chicory root extract was tested on patients with osteoarthritis in the hip or knee, and found to provide some level of relief from pain and stiffness.

In another study, the introduction of oligofructose (OFS) such as chicory derived inulin led to lower levels of ghrelin, the so called “hunger hormone” that stimulates appetite and better weight management.

Influence of Inulin and Oligofructose on Breast Cancer and Tumor Growth

Phase 1, placebo-controlled, dose escalation trial of chicory root extract in patients with osteoarthritis of the hip or knee

Gardens Ablaze gives the following suggestions for medicinal use of chicory:

Chicory teas taken internally are believed to be effective in treating jaundice and liver problems. Additionally, as with many other herbs, a tea made from roots or leaves appears to be useful for those with digestive problems.

Save a little tea and try dipping a cotton ball into it for a refreshing and soothing eye wash. You can also add a spoonful or two of honey to thicken and use as syrup for a mild laxative for kids. For long-term use, try drying and pulverizing Chicory leaves into a powder for use in capsule form. Please see How to Make Herbal Capsules for more information.

Consuming small amounts of chicory in food is likely safe for most adults. Large amounts may cause gastrointestinal distress. The inulin ferments in your digestive tract, producing excess gas and associated issues. (Eat an “energy bar” loaded up with chicory and you’ll see what I mean.)

If you are allergic to members of the daisy family, such as ragweed, be cautious with chicory, as it may also cause an allergic reaction.

Don’t use medicinal quantities of chicory while pregnant, as it may induce a miscarriage.

If you have gallstones, chicory may cause problems, as it stimulates the production of bile. (Source)

How to Make Chicory Coffee

Chicory roots are dried, roasted and ground, and then brewed like coffee. A good family friend who recently passed away, Mike Jacisin, used to be a regular chicory “coffee” consumer. Mike was one of my early wildcrafting inspirations.

Chicory leaves are edible and rich in nutrients, like dandelion leaves, but extremely bitter. If you can find them, the small rosettes of early spring are the most palatable. Those who don't mind bitter greens can use the young greens raw (sparingly) in a salad. Cook older leaves with a couple of changes of water. They'll still be bitter, but less bitter. The white bases (or crowns, as Samuel Thayer calls them) of older plants can be trimmed of the bitter green leaves and eaten. The white base is somewhat less bitter than the green leaves.

In The Flower Cookbook, Adrienne Crowhurst makes pickled chicory flowers. I have not tried this, but the recipe sounds interesting.

A unique wildcrafted condiment for the adventurous eater.

Wash the chicory buds or flowes in ice cold water; drain. Place them in a sterilized canning jar (or jars). In a saucepan, bring the vinegar, salt and ginger to a boil. Simmer for five minutes. Remove mixture from heat and add the sugar; stir until dissolved. Pout this liquid over the flowers and buds in the jar(s). Seal and store in a cool place for at least one week before using.

The Ohio State University Extension document “Use of Forage Chicory in a Small Ruminant Parasite Control Program” notes that chicory contains secondary plant metabolites called sesquiterpene lactones, which may help to reduce the parasite load of small ruminants. Some varieties are more effective than others, and may prove to be a viable alternative to chemical dewormers.

The study “Chemical Composition and Nutritive Benefits of Chicory (Cichorium intybus) as an Ideal Complementary and/or Alternative Livestock Feed Supplement” cites the benefits of chicory inulin for livestock digestive health, reduced parasite loads with ingestion of chicory, and increased reproductive rates of sheep on chicory forage, among other benefits.

The flowers attract short-tongued bees and probably other insects. Both nectar and pollen are available as floral rewards. The foliage of Common Chicory is eaten by Melanoplus bivittatus (Two-Striped Grasshopper), Melanoplus femurrubrum (Red-Legged Grasshopper), and probably other grasshoppers. The larvae of a lizard beetle, Acropteroxys gracilis, bore through the stems of this plant, while the caterpillars of the moth, Pyrrhia exprimens (Purple-Lined Sallow), feed on the the flowers, buds, and developing achenes.

While chicory does provide a nectar source for bees, it produces a yellow, bitter honey.

Other Names for Chicory

Learn to Use and Appreciate the Weeds

“Weeds” are just plants that grow without planting – or where you may not want them. They serve a purpose. I always tell the boys, “Nature abhors a vacuum.” If there is an empty niche, nature fill it. Our weeds hold the soil in place, plow compacted subsoil, draw up nutrients, provide medicine, feed wildlife (and people) – they are a treasure, not a curse. As you tend your yard and garden and the soil improves, unwanted volunteers will either disappear on their own, or be much easier to manage.

Thieves Vinegar, Four Thieves Vinegar, Vinegar of the Four Thieves or Forthave’s Vinegar – no matter what you call it, thieves vinegar has a long history of use. From Scientific American’s 1910 reference to “medicated vinegar was invented by four thieves of Marseilles who successfully employed it as a prophylactic during a visitation of pestilence”…

Dandelion is just a weed to some, but savvy foragers know how to use it for free food and medicine. We’ll share how, plus tips to get rid of excess plants.

Joe Pye weed is a great native plant to add to your butterfly garden, and it also has a history of medicinal use. We’ll share where to find it, how to grow it, and historical uses of this flowering plant. The photos in this post are Eutrochium maculatum, which is also known as spotted Joe…

If PMS is making you an uncomfortable cranky-pants, you can pop a pill and zone out on a caffeinated buzz until it’s all over with, or you can grab some herbs and get some tailor made natural relief. You know what your most bothersome symptoms are, and more than likely they change a bit every…