Learn about the benefits of burdock. This edible, anti-inflammatory plant has a long history of use as an herbal cleanser, blood purifier and tonic. We'll share tips on identification, harvesting and use for food and medicine.

Burdock, Arctium lappa and Arctium minus

Range and Identification of Burdock Plants

Native to Asia and Europe, burdock has naturalized around the world. It's found throughout most of the United States and North America, except Florida and the extreme northern parts of the continent (see map).

Burdock thrives in moderately disturbed areas such as barnyards, field edges, fence rows, railroad tracks, roadsides, along paths and sometimes along the edges of woodlands or streams. Animals carry the seeds in their fur or feathers, distributing them far and wide.

As a biennial, the plant takes two years to complete its growth cycle. This means that it must be relatively undisturbed during this time. Thus, the growth along edges of fields and crop lands, etc. Under certain growing conditions, plants stay in a rosette for two years and don't bloom until year three, so wild burdock plants may be a mix of ages.

During the first year of growth, the plant forms a basal rosette with 2-5 large, wedge shaped leaves up to 28 inches (70 cm) long and 14 inches (36 cm) wide. They resemble rhubarb at a glance, but rhubarb leaves are glossy, while burdock leaves are matte and somewhat fuzzy on the underside.

During the second year of growth, plants produce a large flower stalk, reaching up to 6  1/2 feet (2 m) tall. (These plants tend to be very easy to spot.)  Mine usually stand about 4-5 feet tall.

Flowers are small and emerge from the tops of green, prickly balls. The fragrance is sweet, if you can get close enough to take a whiff. They are pink in color, and resemble the flowers of bull thistles.

Arctium minus flowers are shown below.

These flower heads dry into little brown prickly balls that stick to everything, inspiring the invention of velcro fasteners.

The above ground parts of burdock have a very bitter coating. Once you get past that, the flavor of the flower stalks and leaf petioles is mellow. The roots are the tastiest, with a flavor somewhat like parsnip, but less sweet.

Don't try to eat the leaves. In The Forager's Harvest, Samuel Thayer states (with respect to eating the leaves after cooking them in several changes of water), “Perhaps there is some semantic loophole by which such horrific greens can be admitted to the edible classification…”

NOTE: Burdock can accumulate toxins from the environment, so always forage from uncontaminated areas to use the plant for food or medicine.

What parts of burdock are edible?

Edible burdock parts include the petioles (leaf stems), flower stalks and roots. Remove the outer covering of petioles and stalks before cooking, as they are very bitter.

Samuel Thayer says cooked burdock stalks are superb. “When steamed or boiled for a long time they become very soft like new potatoes; they are starchy and not at all fibrous like the roots or petioles. I like to serve them alone as a vegetable dish, and their mild, slightly sweet flavor can't go wrong in soup or stir fry. When burdock stalks are in season (late spring to early summer, when the shoot are 1-3 feet tall and not yet stiff), they are a truly fine vegetable.”

Healing Wise (Wise Woman Herbal Series) Healing Wise gives full instructions for harvesting and storing the plant parts, and using them medicinally, as well as a number of recipes including “Chicken Fried Burdock Stalks” and “Japanese Sweet and Sour Gobo”.

Susun Weed recommends prepping your stalk by removing the skins, chopping to size, and then soaking for 15 minutes in cold water with a splash of vinegar. She then boils for 10 minutes, strains, and boils with fresh water for another 10 minutes, or until tender. I tried out her “chicken fried burdock stalks”, and they weren't half bad.

Fresh burdock root is good in stir fry, and tastes fairly mild raw – crisp and a bit sweet. Collect roots any time from mid summer to late fall, or in spring before the plants put up a flower stalk. Once the plant shoots up a stalk, energy stored in the root goes to produce the flowers, and the roots get tough and tasteless.

If you really want to try “gobo” root, you may want to plant some seeds in deeply cultivated, well mulched soil. Digging roots in rough ground is a major undertaking – they grow really deep.

Several of my favorite wildcrafting books rave about burdock. Susun Weed loves burdock, and goes on at length about it in Healing Wise. She recommends all parts of the burdock – roots, seeds and leaves. There's even talk of burdock as an aphrodisiac.

Backyard Medicine gives instructions for burdock leaf poultice, burdock root extract (decoction) and burdock and dandelion toffee. To make a poultice, simple steam the leaf and apply it hot to the affected area to speed healing. Cover with a hot pack or hot water to trap the heat and leave on for about 30 minutes. Try this on sore muscles or skin damage.

Brew burdock root tea as a decoction, boiling the roots for around 20 minutes to release the active compounds. A combination of burdock root and dandelion root is excellent for detoxifying.

Both burdock roots and seeds are used as a diuretic, helping to remove excess water from the body. Edema (abnormal fluid retention) is a common problem with many people as they age and/or are less active.

The seeds act as a laxative, making them useful for constipation. Burdock root contains inulin (insoluble fiber) and mucilage, bulking and softening stool for easier passage. (Note – excess inulin may cause gas. Start with a small portion if consuming burdock root for the first time.)

Burdock root has a long history of use to lower blood sugar in diabetics. A 2014 study looked at the antihyperglycemic potential of dried burdock root extract, and found evidence of improved glucose tolerance. It is listed under Herbal Remedies for Diabetes in the International Journal of Biomedical and Advance Research.

Burdock root has antifungal and antimicrobial properties, and has been shown to act against gram negative bacteria, like E. coli. (source) The sesquiterpene lactone found in the leaves acts against gram positive bacteria, such as Staphylococcus aureus.

Used internally or externally, burdock may help with skin conditions. Burdock seed tincture is often applied to the skin or taken internally for acne.

Burdock root tea and tincture, especially in combination with dandelion, helps to clear toxins, and may help with conditions such as psoriasis and eczema.

Historically used by the Potawotami Indians for treating cancer, burdock is also one of the four herbs used in Rene Caisse's Essiac® tea and the Hoxsey Formula. A 2016 study found benefit to the use of burdock seed extract in bladder cancer treatment.

Possible Side Effects or Allergic Reactions

Although burdock is generally considered safe, there are a few possible side effects of Arctium lappa and A. minus:

This post is for general information only. It is not intended to treat or diagnose specific illness or replace medical advice from your healthcare provider. Always exercise caution when using any wild plants and make sure you have positively identified the plant.

Burdock flowers attract long-tongued bees, including bumblebees, honeybees, Miner bees, and Leaf-Cutting bees. Other visitors include bee flies, butterflies, and skippers, which seek nectar and are also effective at pollination.

The caterpillars of several moth species bore through the stems, and painted lady butterfly caterpillars (Vanessa cardui) eat the leaves. Ring necked pheasants eat some burdock seeds, but they're not a primary food source.

Burdock's butter taste keeps most mammals away, although livestock and deer will eat it if they have little else. The foliage may be toxic to rabbits.

If burdock is taking over your pasture, it may be time for some soil testing. The plants like soil that's high in iron and low in calcium. Sometimes adding lime or gypsum may help.

Burdock only reproduces by seed, so  clear plants before the seed matures (or burn the dried seed heads) to reduce the spread. Regular mowing and cultivation will knock the plants back, but the roots go deep. Healing the soil and planting ground cover to crowd the burdock out is your best bet for long term control.

More Ways to Use Wild Plants

This post is #30 in the Weekly Weeder series, which is all about wild plants – how to identify and use them, where they grow, and how to get rid of them, if needed.

Other posts in the series include:

Please Like, Pin, Stumble or otherwise share this post if you enjoy learning about wild plants. It only takes a moment and I really appreciate your help.

Wild lettuce has a long history of use as a sleep aid and pain reliever. We’ll cover how identify and use wild lettuce, potential side effects, and how to get rid of it if it’s taking over your yard and garden.

Wild strawberries are some of my favorite wild fruits, but they do have a look-alike (mock strawberries). We’ll help you find the right berries, and share tips for growing and use. 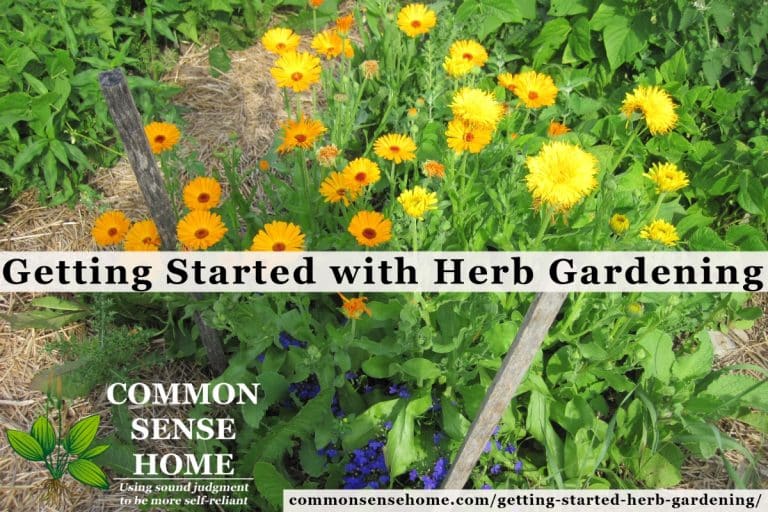 Wondering how to get started herb gardening and what herbs to grow? Unsure about soil preferences of herbs or their growth habits? Interested in growing your own herbs for herbal healing? If you answered “Yes” to any of these questions, there are a couple of books I’d like to recommend to you – The Practical…

Blue eyed grass is a perennial wildflower that looks like grass, but is actually a member of the iris family. We’ll share where to find it in the wild, growing tips for your garden, and historical uses. Blue-Eyed Grass, Sisyrinchium montanum There are over 40 species of blue-eyed grass in North America, and they look…

New England Aster, Symphyotrichum novae-angliae (formerly Aster novae-angliae) is one of my favorite native wildflowers. We’ll share how to identify and use this fall beauty, and some troubleshooting tips for growing it in the garden. New England Aster is also known as starwort, blue chamomile, blue daisy, fall-rose, and frostweed.