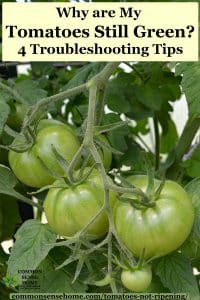 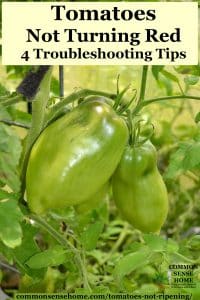 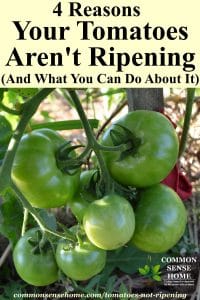 Tomatoes not ripening? Here are the four main reasons why your tomatoes aren’t turning red, and what you can do (if anything) to help ripen your tomatoes.

Why do tomatoes turn red?

Tomatoes turn red because of their lycopene content. What is lycopene? From Web MD (emphasis mine):

Lycopene is a naturally occurring chemical that gives fruits and vegetables a red color. It is one of a number of pigments called carotenoids. Lycopene is found in watermelons, pink grapefruits, apricots, and pink guavas. It is found in particularly high amounts in tomatoes and tomato products.

In North America, 85% of dietary lycopene comes from tomato products such as tomato juice or paste. One cup (240 mL) of tomato juice provides about 23 mg of lycopene.

People take lycopene for preventing heart disease, “hardening of the arteries” (atherosclerosis); and cancer of the prostate, breast, lung, bladder, ovaries, colon, and pancreas. Lycopene is also used for treating human papilloma virus (HPV) infection, which is a major cause of uterine cancer. Some people also use lycopene for cataracts and asthma.

How does it work?

Lycopene is a powerful antioxidant that may help protect cells from damage. This is why there is a lot of research interest in lycopene’s role, if any, in preventing cancer.

Note that our bodies find it easier to use lycopene once it’s been heat processed. This is why I let my kids eat plenty of our homemade salsa, spaghetti sauce and ketchup.

So – no lycopene = no red tomatoes.

Each tomato variety has a time to maturity, i.e., days that it takes to ripen fruit from when the seed is planted. As a northern grower, I make sure to include some varieties that have a shorter time to maturity, along with some of the larger, longer season tomatoes.

If we get a particularly bad year, the short season tomatoes may be the only ones to have time for ripening on the vine, but usually they are simply the first tomato plants to give me ripe tomatoes for the season. As the season progresses, more varieties ripen.

Most tomato fruits ripen in six to eight weeks after blossoms pollination.

Some of my favorite short season varieties are:

My friend, Tami, who busts her tail to start her seedlings early in her greenhouse and get them out in the garden as soon as absolutely possible, saw something she never saw before. Instead of getting red, her tomatoes stayed pink – but they rotted as if overripe.

She harvested all the pink, soft tomatoes and made some very ugly tomato salsa, but the flavor just wasn’t very good.

As the season progressed, the tomatoes that did ripen were bland and flavorless. I took to picking them as soon as they started showing the first blush of color and bringing them inside to fully ripen, because the nights were so cool. The peppers were the same way. Full size, but they stayed stuck in the mature green stage until I brought them in to the counter, where they turned red in a couple of days.

Reason #3 Your Tomatoes Are Not Ripening = Temps are Too Hot

This year (2015), many area of the country are running into the opposite temperature extreme – it’s too hot for the tomatoes to ripen. While tomatoes are generally heat loving plants, roasting heat is a problem. Cornell University Cooperative Extension notes:

The optimum temperature for ripening tomatoes is 70 to 75°F. When temperatures exceed 85 degrees to 90 degrees F, the ripening process slows significantly or even stops. At these temperatures, lycopene and carotene, pigments responsible for giving the fruit their typical orange to red appearance cannot be produced. As a result, the fruit can stay in a mature green phase for quite some time.

What can you do if you’re stuck with green tomatoes and intense heat? Once the tomatoes have reached mature size, you can bring them inside to finish ripening. Remember, tomatoes like it 70-75 °F – just like many of us humans.

See Summer Gardens – Dealing with High Temperatures in the Garden for more tips on coping with extreme heat.

Never put your tomatoes in the fridge! Keep them at room temperature. With apologies to my husband’s late great Uncle Bill, who worked on the railroad for many years and shipped tomatoes in refer cars – don’t store tomatoes in the refrigerator.

Cold temps turns the sugars in the tomatoes to starch, ruining the flavor and making them mealy and bland. This is part of the reason many store tomatoes taste so bland. They are shipped in refrigerated trucks. Tomatoes stop ripening and don’t rot, but the flavor is subpar.

With the growing popularity of heirloom tomatoes, there are many varieties now available that simply do not turn red, even when ripe. Tomatoes varieties may ripen to pink, orange, yellow, purple – even green. If you’re trying a new variety of tomatoes, make sure you know what the mature stage is supposed to look like, so you don’t miss out on the yumminess.

For instance, when I first tried garden peach tomatoes, I gave a plant to my mom. She didn’t tell my stepdad what she was growing. He saw the thin skinned, lightly fuzzy tomatoes in the garden, and thought they were sick. He picked the ripe tomatoes and tossed them out.

Mom went looking for her tomatoes and found them gone. They got it sorted out, but she had to wait a little longer to try the tomatoes.

Since I plant several different colors, I always note which plant is where on my garden charts. I also take care not to place plants that have similar size fruit but mature to orange and red next to each other, so I’m not mistaking underripe red fruit for ripe orange fruit.

How to Tell When Green Varieties of Tomatoes are Ripe

I’ve been growing Green Zebra tomatoes for a number of years, because the flavor is excellent and they usually produce a good crop here. As the name implies, they ripen green with stripes. As with other green varieties I’ve tried, you can tell they are ripe because the underlying color of the green tomato turns more yellow/golden instead of white/lighter green when they’ve reached full maturity. The flesh turns soft and juicy.

Check out these recipes that will help you enjoy your harvest year round!

Also, if your tomatoes refuse to ripen, green fruits are safe to eat. Just process them in some way before eating, such as cooking or pickling. We turned the green tomatoes knocked off our plants during a hail storm into green tomato pickles (recipe here).

Other Reasons For Strange Colored Tomatoes

Sunscald – Light colored, leathery patches, generally found on the top or side of the tomato, may be sunscald. Sunscald is due to intense sun exposure. If not spoiled, the rest of the tomato may be used. Sometimes the scald leads to rot.

Blossom End Rot – When the blossom end of your tomato fruits has a small or large black lesion, this is blossom end rot. It’s linked to low calcium availability in the soil, so adding calcium during planting may be helpful for avoiding it.

BUT – even when there is calcium in the soil, too much or too little rain can make it unavailable to the plants. Regular, even watering is best. Read “7 Steps to Stop Blossom End Rot” for more on the causes of BER and how to prevent and control it.

For more tips on dealing with excess rain, see Too Much Rain in the Garden – Managing Wet Dirt and Waterlogged Plants.

You may also enjoy more posts from our gardening section, including:

Previous Post: « Phytophotodermatitis – Plants That Cause It, How to Treat It
Next Post: Blueberry Netting Tips – Protecting Blueberries from Birds (& Deer) »