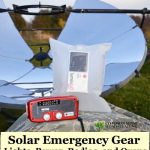 Solar emergency gear isn't just for summer or warm climate areas. The new generation of solar gadgets and tools can be used year round – even in cold temps. Some items, like the SunOven, have been around for years, proving their durability and long life. New tools like LuminAID solar lights are making huge inroads in emergency relief and general use solar lighting. In this post I'll share some of my top picks for emergency solar lights, power, radios, ovens and more to give you an overview of the tools that are now available.

LumindAID inflatable solar emergency lights – I did a full review of the LuminAID lights earlier this year. I like their impact and water resistance, and how they light up an area with a diffuse light instead of a glare. We haven't used them in an emergency yet (thankfully), but they were handy to light up the inside of our new shed when we were working after nightfall.

Etekcity Portable Outdoor LED Camping Lantern – One of the top rated solar emergency lights on Amazon, these lanterns are styled like a traditional propane lantern – without the fire danger. The unit uses 3 standard AA rechargeable batteries, which are included. It provides 60 lumins for 12 hours on a full charge. Etekcity also includes a 10 year limited warranty.

Goal Zero 22004 Yeti 150 Solar Generator – Goal Zero is a recognized leader in portable solar power. This generator is small – about the size of a toaster. I'm not keen on the name “generator” because it doesn't generate power, it only stores power. You can recharge it from a wall outlet, a car or solar panels. (See Goal Zero Nomad 20W Solar Panel and 8mm adapter cable). This is a moderate duty unit, suitable for powering laptops, lights and smartphones. (Don't try to plug in the circle saw.)

Soluser Solar charger for Cell Phones, Cameras, GPS, etc – This is a palm sized unit that's designed primarily for take along extra power. It has four USB ports, one of which is USB-C. This covers most tablets and smartphones. For a quick charge it's best to plug it into an outlet, but the solar panel does work. Handy to have along if you have a device that drains its battery quickly.

Goal Zero 31901 Yeti 1250 XX-Large Solar Generator – If you want a solar generator big enough to power tools and refrigerators, then this is the size unit you need. Again, think battery bank (like the smaller unit above). It's usually paired with two (or more) Goal Zero Boulder 30M solar Panels and an adapter cable. With a full charge, the Yeti 1250 can power a refrigerator for 12 hours or a chest freezer for a week. Several people noted in Amazon reviews that they use this unit for their CPAP machines. Recharge time on the unit will depend on sun exposure and number of panels.

SunOven – The SunOven is an insulated solar box cooker. These units have been in use around the globe for decades. In addition to baking and slow cooking, they can also be used to dehydrate food and purify water.

Sol Source Solar Cooker – These units look something like an old-school satellite dish at ground level. They use a parabolic dish to concentrate the sun on your cooking vessel, allowing you to grill, steam, bake, boil or fry. (The SolSource is the reflector featured in the top and bottom photos. Cookware is placed in the black center circle.)

GoSun Sport – Tube shaped solar cooker with a cooking trough inside an evacuated tube, flanked by concentrating “wings”. At only 8 pounds, this unit is the lightest of the bunch – a better fit for camping or backpacking. It tolerates clouds better than the other two units because of the high degree of insulation provided by the vacuum tube.

All three units can be used to boil and/or purify water. For a more detailed comparison of these solar cooking options, check out “What’s the Best Solar Cooker? Choosing the Right Unit for Your Cooking Style“.

In this article we’ll talk about 5 basic things you must include in a root cellar design, plus 10 tips for fruit and vegetable storage. There’s also a printable storage guide for over 30 fruits and veggies, and links to additional information at the bottom of the post. A root cellar is a great low-cost…

We’ve talked about “Emergency Cooking – 10 Ways to Have a Hot Meal When the Power Goes Out“, and I firmly believe that everyone should have multiple ways to prepare a hot meal in case of emergency. If you’re camping (at least around here), it’s getting tougher to have an old-fashioned campfire. Due to concerns…

Prepping on a budget is possible, even if you don’t have a lot of time and money.  Like most projects, you can stretch your cash farther with the right mindset and some determination.

With ongoing economic uncertainty and erratic weather conditions, investing in food and general preparedness storage makes sense and can provide a very good return on time and money spent. Food prices keep creeping up and packages keep getting smaller, so what you can stash now will almost certainly cost more in the future. Also the ingredients… 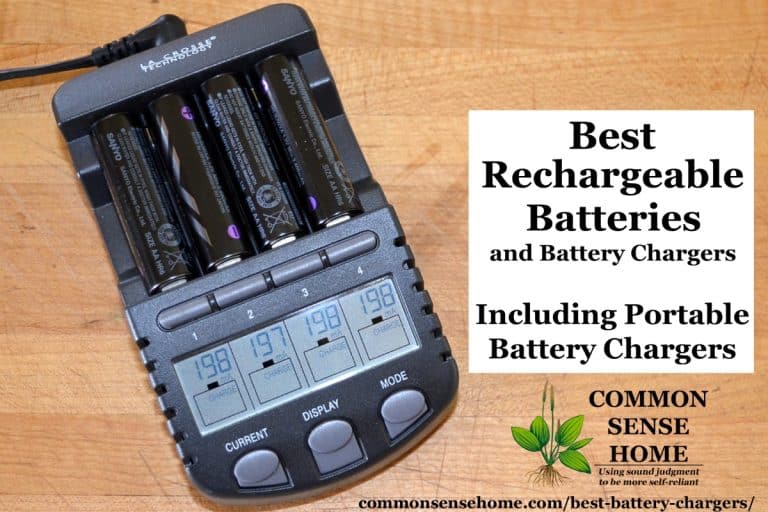