Solar cooking is simply harnessing the sun's energy to cook food. This is an excellent way to keep the house cool in the summer, costs nothing to use, and is a great alternative to conventional cooking.

1. Solar Cooker – you can make your own (see below) or buy a unit that's ready to go like the Sun Oven.

2. Dark Pot to cook in – Your cooking vessel can be graniteware, cast iron or an aluminum pot painted black on the outside. The thin walls of the graniteware (the new type, made of stainless steel covered by enamel) or aluminum conduct heat well.

If you are not able to find black or darkened pots and pans for use in your solar cooker, you can cook your food in jars. Canning jars are preferable because they are designed for high pressure and heat. Regular clear jars can be used if you do not seal them too tightly in order to diminish the possibility of exploding. You can paint them black for better heat absorption.

You also need sun, of course, generally two to five hours of it, depending on what you're cooking.

The golden rule of solar cooking is: GET THE FOOD ON EARLY, AND DON’T WORRY ABOUT OVERCOOKING.

Inner tube cooker – The simplest design of a solar collector uses an old tire innertube. Place the inflated tube on a board on the ground. Place the cooking vessel inside the tube. Cover the tube with a piece of plain glass. The place in the well of the tube is like a closed cavity. Air neither go out nor come in. The rays of the sun enter the glass and get trapped. Slowly, the temperature of the cooking vessel rises, and the food is cooked. You can add a mirror on top of the board, which would reflect more of the suns rays on to the pot.

Bucket Cooker – Another simple way to harness the sun into a solar cooker is by using a bucket. Take a 5 gallon bucket, put a heavy rock in it to keep it stable. Take your shiny car window shade and fold it into a cone shape. It will be an awkward cone. Then place the cone tip into the 5 gallon bucket. Get a black pot with lid and fill it with your food. Put pot on a cheap-shiny pizza pan. Slide both pizza pan and pot into a turkey cooking bag. Close and tie off bag. Place bag, pot and food over the center of your shade cone and leave it facing the sun.

Basic Cardboard Box Solar Cooker – 23 years ago, we started with 2 cardboard boxes, one inside the other with the gap between filled with insulation, covered with none other than duct tape. Flashing, found at a builder's store, made up the sides and bottom. A piece of mirror was taped to the box flap. We used a stand-up dressing mirror for the sun reflecting into the box, and used a piece of glass to cover the top … Voilà, we had a solar cooker! It worked great!

Wooden Box Solar Cooker – We have since built a newer model, shown at the top of the post. The new sun oven is a black wooden box, with fold out lids that can be closed up when not in use. The inside of the box is painted black. After the food is placed inside, a piece of glass is placed on top. Two flaps were hinged to the top and mirrors attached. These flaps can be positioned to reflect the suns rays into the box, where the sun's heat is trapped.

The sky is the limit to what type of solar cooker you want to make. People have made them using pizza box, or shoe box – which would be a great kid's project. Check out “Build a Solar Oven” at Home Science Tools for instructions on how to make a solar oven out of a pizza box.

All you need is a device that will focus the solar radiation into the cooker and onto the pot.

The article, “Making and Using a Solar Cooker” from Backwoods Home provides instructions on how to make a sturdy solar cooker using cardboard and aluminum foil with folding reflectors.

How to Cook Food in a Solar Oven

The best times for cooking with a solar cooker is between 10 am and 4 pm – that is usually when the sun is at its hottest.

If started early, will be done on a fair day in around 2 hours.

If started early, ready by noon on a good day or by evening on a fair day.

If started early, ready for late lunch or dinner on a good day.

Now that you have figured out the solar cooker, it is time to cook something.

If you just want to experiment with an easy recipe, try cooking RICE:

Place the dark pot into the solar cooker, orient it so the sun is shining directly into the cooker and let the sun do the rest. Rice takes about an hour. Condensation on your window is a sign that the rice is cooking. You can check it then. (Be VERY careful lifting the lid of the pot off because the steam WILL burn.)

Soak about 1/2 pound of pinto beans in water overnight. Drain the beans and add fresh water to cover the beans by about 1/2 inch. Add a pinch of salt, some chopped onion, a little garlic, and a slice of bacon if you like. This all goes into a covered dark pot and is cooked ALL day in the solar oven. If you notice the water has boiled away, just add more hot water. They are done when they are tender.

Slice a couple of pre-baked potatoes into a dark pot. Drizzle the potatoes with olive oil, add a 1/2 cup of milk, sprinkle with salt and pepper, and a generous amount of Parmesan cheese. Mix briefly, then cover and place into a preheated solar oven and bake until hot- about an hour or so. Real easy- REAL GOOD!

For a total meal, try All in the Pot Chicken.

Cut up vegetables – potatoes, carrots, onions, green beans, turnips – any favorite vegetable. Place it on the bottom of your dark pot.

Cover this with your chicken pieces, skin side up, seasoned with your favorite herbs. (I like to add paprika, salt and pepper.) Cover the pot with the lid, and cook for 1 1/2 – 2 hours. *If you don't want the skin on, add a cup or so of chicken broth/water. Use caution when removing the pot and the lid – it is HOT – just as hot as if it had been in the oven.

If you've got sun, a little ingenuity and some patience, solar cooking may be a great addition to your homestead, too.

This is a guest post by Marcy Lilly of Lillywhite Farm. Marcy and her family have been homesteading since 1993. They homeschooled their three children the while raising a variety of domestic and exotic animals. They take pride in their frugality by “nickle and diming” it. They lived without electricity for many years, using oil lamps for light. They built their home with their children's help, using hand tools. You can visit her Facebook page at Lillywhite Farm, and read more about her homesteading adventures at www.highlonesomeranch.com/.

My mom’s parents would be referred to as preppers if they were living in today’s world, but back in the day, they lived like many country people did. Great Depression life wasn’t easy, but their daily choices afforded them more abundance than many, especially once rationing set in during the second World War. Mom used…

The Thrunite TN12 is a great 18650 flashlight for camping or night work. You’ll notice it in a pocket, but it’s still small enough for an EDC flashlight. When we have to search around the yard in the dark, this is the flashlight we grab.

The Baofeng BF-F8HP is a handheld two-way ham radio, the upgraded successor to the very popular UV-5R (which is still available).  We’ll compare the two and suggest some recommended accessories and alternatives. This radio can listen to: VHF and UHF Ham frequencies and FM, NOAA, GMRS and FRS without a license.  All transmissions (broadcasts) require… 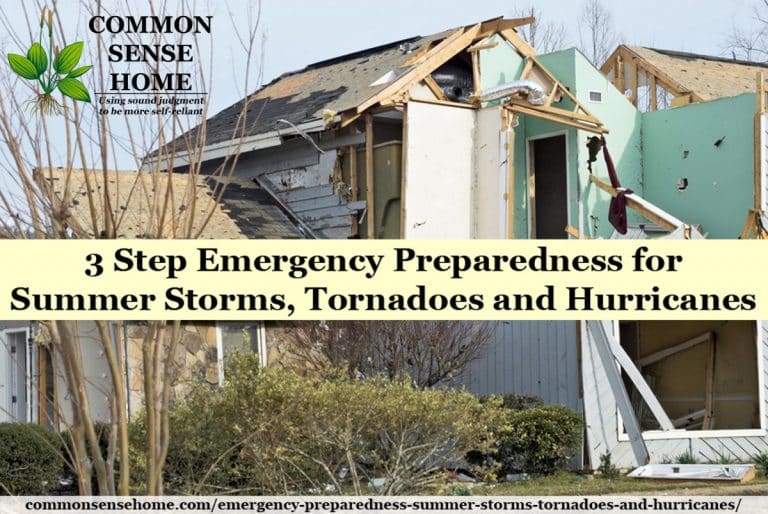 Emergency preparedness is for everyone. The more basic emergency needs that each family or individual can prepare for themselves, the less stress there will be placed on emergency management services. Summer storms, tornadoes and hurricanes often come with damaging winds and rain, and have similar preps even though they occur in different areas of the…

This is a guest post by Amber Bradshaw. I wish our first experience with a DIY portable toilet had been somewhere fun like a camping trip, but unfortunately when we needed an “Emergency Relief System” (ERS), it really was an emergency. Our toilet would not flush and there was nowhere else to go. I’ll share…