Don't hate the weeds! Many weeds are edible and/or medicinal, or have other uses such as natural dye or cordage. They can also be used to diagnose soil health, as many weeds thrive in disturbed and damaged soils. They are part of nature's repair crew.

I use non-toxic weed control so weeds don't take over the walkways and garden areas. With a little observation and patience and a few simple tools, you can kill weeds naturally without poisons. (“Killing naturally” sounds like an oxymoron, but death and life are part of the natural cycle.)

You can virtually eliminate quackgrass, crabgrass and other problem weeds, and enjoy a tidy yard and lush garden without hours and hours of pulling and tilling.

Oh mulch, how do I love thee! Straw or old hay are my favorite for use in the main garden, as they are less pokey on bare feet.

Why damp newspaper? We get a lot of wind, so using damp paper keeps it from blowing away while we put the straw down. It also speeds up the creation of the happy microclimate under the straw where the soil is cool, moist and protected from scorching summer heat.

Where I don't use straw mulch, I use living mulch. You can purchase a number of different plants/seeds to use as groundcover, such as buckwheat, clover, oats, or legumes.

Another option is to work with “volunteer groundcover” AKA weeds. It might sound a little crazy to fight weeds with weeds, but as you work with them you'll find some weeds are much better behaved than others.

As a double bonus, a number of these groundcover friendly weeds are also tasty.

Some of my favorite weeds to use as groundcover are purslane, lambsquarters and clover. Purslane grounds low to the ground, as does white clover, so they don't get in the way much at all once plants are established. Lambsquarters gets taller, so I use that near tall crops, like corn or sunflowers.

Last season I let lambsquarters and purslane spread in my corn patch once the corn was established. It was the first year my corn didn't get knocked over at all during our late summer wind storms.

Could I have used another crop (like beans or squash, “Three Sisters” style)? Yes, I could, but the weeds were free, planted themselves, and I didn't feel bad walking all over them when it came time to harvest the corn.

I think the Three Sisters arrangement works best with shell beans, winter squash and flint corn, which are all harvested together at the end of the season.

I have had good results planting hills of squash around the edges of the sweet corn patch and letting the vines trail in. This deters raccoons, and keeps the ground open enough that I can still get in to harvest the corn.

Around permanent plantings like trees and shrubs, wood mulch is my mulch of choice, because it takes longer to break down.

I don't recommend landscape fabric under your mulch. Eventually, grass will break through, and it'll be harder to remove because it's caught in the fabric. Cardboard, old paper feed sacks or thick layers or newspaper are my preferred options – or more mulch.

Don't let the mulch touch the trunk of the tree, or it may cause rot or fungus. Leave a few inches of space to give the tree room to breathe. Think “doughnut”, not “volcano”.

A spray bottle filled with white vinegar is simple and cheap. Spritz the vinegar on problem weeds on a bright sunny day. It will damage their protective outer layer and basically allow them to cook in their own juices. (Mean, but functional.)

Want to make your vinegar weed killer spray even more effective? Add an ounce of dish soap per gallon of vinegar. Still not enough? Try adding a quarter cup of salt.

On young broadleaf weeds like dandelion or oxalis, plain vinegar or the vinegar mixes are pretty effective.

On older, more established plants with deep tap roots or quackgrass with long runners, odds are the plant will regrow from the roots. Repeated application will likely be needed.

This spray is also non-specific – you can damage your garden seedlings right along with the weeds. Vinegar and salt may also discolor pavers or walkways.

Heavy use of vinegar may lower soil pH, making the soil more acidic. (Good in the blueberry patch, not so great in other spots.) Use thoughtfully.

I put my canning water to use a second time getting rid of the weeds that pop up in the gravel walkway by our front door. Just pour the boiling water straight on the weeds to quick cook them, making sure not to splash yourself.

This is a safer option for any surface you are worried that vinegar may damage. Pretty effective against a range of weed sizes, although like vinegar, larger weeds may require multiple applications.

Natural Weed Control #4 – Get Rid of Crabgrass with Calcium

Weeds are not evil or just here to be a pain in the butt – they serve a purpose. Know your weeds and you will know your soil.

In the book, “Weeds, Control Without Poisons“, Charles Walters provides organic control suggestions for dozens and dozens of weeds. Crabgrass and quackgrass are some of the most troublesome lawn and garden weeds, so I wanted to pay special attention to each of them.

Crabgrass, Digitaria sanguialis, is an annual weed that reproduces by stem rooting and seeds. It is course and clumpy and generally unattractive in lawns.

Mr. Walters says that crabgrass overgrowth indicates that the soil is low in calcium. Specifically, they are soils that “cannot support decay starting with actinomycetes molds”.

With application of calcium lime and sulfur or gypsum, crabgrass is reduced in volume. It effectively rots away over time. A soil test will help you determine how much calcium is needed for your soil.

Quackgrass, Agropyron repens, is a perennial grass that spreads by creeping rhizomes and seeds. The rhizomes are the really trouble makers here, as they can spread for yards through the soil, and a full plant can regrow from any little bit left behind.

Quackgrass is a little trickier to ditch than crabgrass. Mr. Walters sites copper, manganese, soft rock phosphate, vitamin B-12, calcium, molasses, soil aeration and use of sulfates as possible treatments to eliminate this weed. Again, soil testing may help you target the right doses to help you get faster results.

Natural Weed Control #5 – Put Your Weeds to Use!

Ralph Waldo Emerson said, “What is a weed? A plant whose virtues have not yet been discovered.”

Many of the plants we call “weeds” were purposefully transported by settlers around the globe because they were so useful. They need to be “rediscovered”.

The Weekly Weeder series has identification and use information for over 40 common weeds. The book, “The Wild Wisdom of Weeds”, “Backyard Medicine” and my other favorite weed books give wonderful tips and recipes for many more wild plants.

Even my teenage boys have been won over by the taste of mock spinach pie made with lambsquarters, and ask for it in season.

My eldest is always game to taste test anything I give him an “okay” on, and my youngest is always asking about which plants are used as habitat for which critters.

When we work in the garden and yard, they ask which weeds to keep and which ones to remove. I love to identify a new useful “weed” in the yard or garden, like when I discovered a patch of self heal at the base of the swales.

What your favorite way to control weeds without poisons? I'd love to hear from you. Have a particularly problematic weed? Leave a comment and I'll see if I can help.

As always, Pins, Shares and Comments much appreciated. 🙂 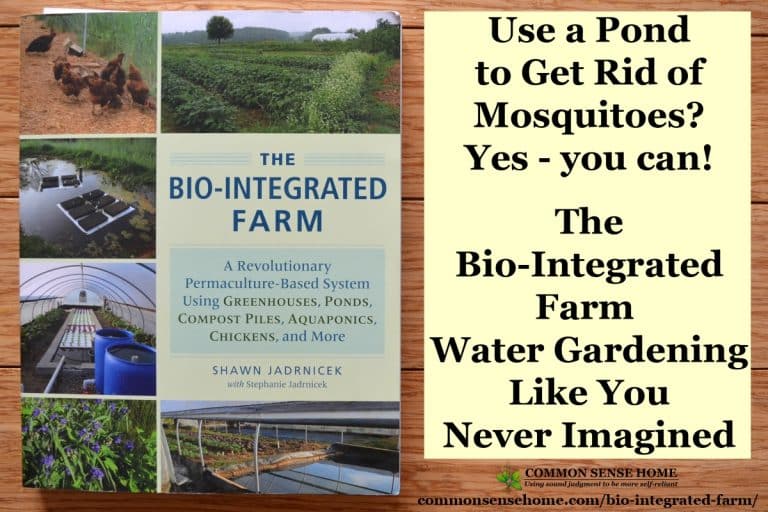 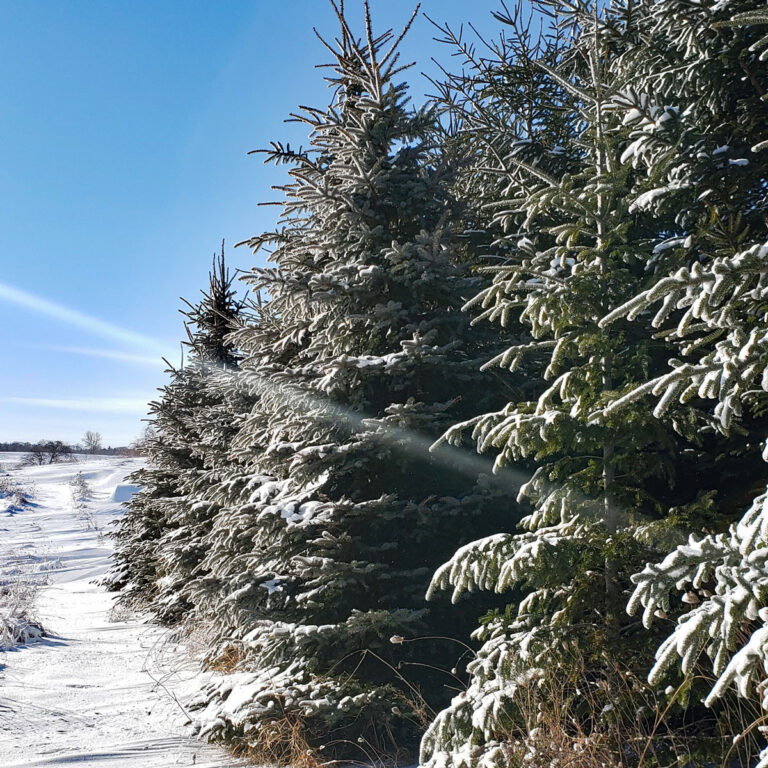 There are many benefits of vertical gardening, from growing more food in less space to making your garden more beautiful. We’ll share some of our favorites vertical garden advantages to inspire you to give it a try. 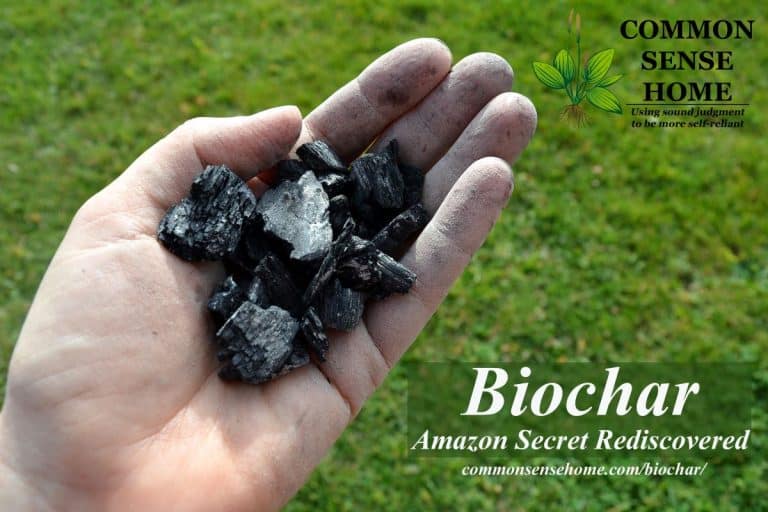 Biochar has been called a modern twist on Terra Preta, the legendary man-made fertile soil of the Amazon basin, but the two are not the same. If you’ve never heard of either of them, you’re not alone, but I hope we’ll be hearing a lot more about both in the years to come. Depending on…