Range and Identification of Quackgrass

Quackgrass is wide spread around the globe, and is native to Europe, Asia and northwest Africa. It can be found through most of North America, except for a few states in far southeast (see map). It is found almost everywhere – lawns, gardens, roadsides, fields. It tolerates acid, neutral and alkaline soils; sandy, loamy and clay soils; it can grow in full shade to full sun, and everything in between. It is so prolific that it is classified as a noxious weed throughout much of the U.S..

The plant is a perennial grass (monocot), blooming in the spring/summer (June through August in the northern hemisphere) and dying back in fall/winter. It produces a vigorous root system via rhizomes, with a single plant spreading out many feet, producing new growth along the length of the rhizome. Here is an example of a single quackgrass plant, with a rhizomes extending roughly 4 feet in length.

Each segment of the root can produce a new plant if left in the soil, making the plant a gardener's bane, but also making it an extremely durable forage crop. The rhizomes also anchor the soil well to help prevent erosion. It's a great range plant, but aggressive competition for cultivated crops in the garden and farm field.

Basically, it looks like grass, and it makes a seed head that resembles the seed head on oats or wheat, but much finer. It produces 15-400 seeds per plant stem (commonly 25-40), which can persist in the soil up to 4 years.. The rhizome root structure is the easiest way to identify this plant.

Quackgrass for Wildlife and Animal Fodder

PALATABILITY :
Many palatable hybrid crosses of quackgrass and other species have been developed and planted for livestock [2]. Feeding trials in Minnesota showed that a quackgrass biotype was as palatable as alfalfa (Medicago spp.) [37]. In cattle grazing trials in Montana, preference was shown for some clonal lines of a quackgrass-bluebunch wheatgrass (Pseudoroegneria spicata) cross [46].

The degree of use shown by livestock for quackgrass in five western states has been rated (from good to fair) as follows [14]:

NUTRITIONAL VALUE :
Quackgrass has been rated fair in energy value and poor in protein value [14]. However, food value studies in Minnesota showed that quackgrass had as much crude protein as alfalfa during May [37]. These authors list concentrations of 10 minerals found in quackgrass in Minnesota. Results of Alaskan studies showed that quackgrass did not contain enough magnesium required for ruminant digestion nor did it have a high mineral content. However, digestibility was 64 percent and greater in three harvest trials [38].

Use of Quackgrass for Food and Medicine

Plants for a Future explains that the the leaves, roots and seeds of quackgrass are edible, but not the tastiest wild harvested crop. Catch the leaves when they are very young for use as a salad green or for juicing. Once the plant gets a little larger (like the one at the top of the post), they leaves will be very tough and fibrous. You can get a more palatable nibble by pulling out an individual stem and eating only the base. (I have done this with many wild grasses.)  The seeds are technically edible, but there really isn't much there to eat.

The roots (rhizomes) are the stars of the plant, both for eating and for medicinal use. They are sweet to the taste (once you get all the dirt off). They contain starch and enzymes, and can be cooked, dried and ground into a flour to use in baking. They can also be dried, roasted and used as a coffee substitute, like dandelion and chicory. They can be boiled into a sweet syrup which can be used to make beer. (I saw this mentioned on a couple of sites, but no recipes.)

Backyard Medicine suggests harvesting the roots in spring or fall to use for medicinal tea. Clean the roots well, cut into short lengths, and dry. to make tea, steep two heaping teaspoons of dried root in a mug of boiling water for ten minutes. Take three times per day. (The Holistic Herbal also recommends the use of couchgrass tinctures.)

In Backyard Medicine, the action of the herb is described as anti-microbial and diuretic. It is recommended as a urinary tract tonic, to treat conditions such as:

In Germany, it has been approved for the treatment of bronchitis, laryngitis, infections and kidney stones. It is also used in combination with other herbs for gout and rheumatism.

As always, any medical information is for informational purposes only. Always exercise caution when using any wild plants and make sure you have positively identified the plant.

I know this is going to sound crazy to many of you, but I leave some weeds in my garden on purpose. This wasn’t always the case.

Love it or hate it, creeping charlie is one tough plant. We’ll introduce you to this common lawn plant, its uses and benefits, and if need be, how to get rid of it. 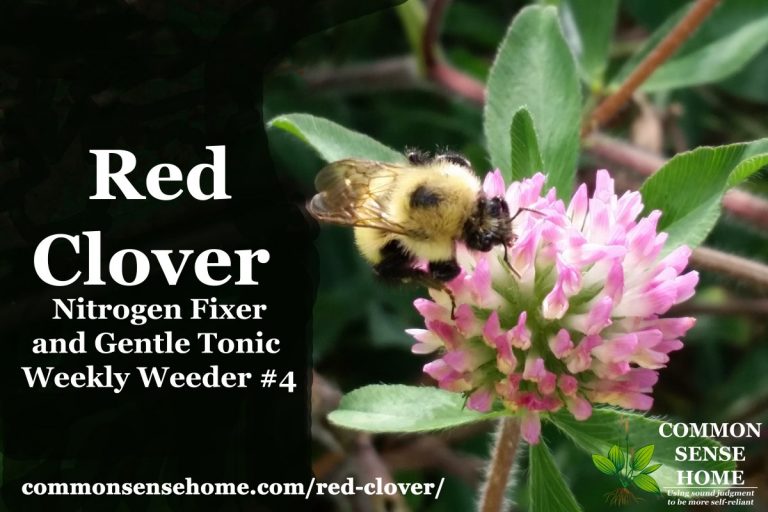 Welcome to the Weekly Weeder series. This week’s weed is Red clover, Trifolium pratense. (Trifolium means “three leaves”.) Native to Europe, red clover was introduced to North America as a fodder crop. It has now naturalized throughout the Americas, Australia and many other parts of the world. Red clover is a legume, and adds nitrogen…

Birds-Foot Trefoil is also known as broadleaf birdsfoot trefoil, Birdfoot Deervetch, bacon and eggs, Dutchman’s clogs, lady’s slippers, granny’s toenails and Devil’s fingers. Range and Identification of Birdsfoot Trefoil Birdsfoot trefoil was introduced from Europe as a forage crop, and has now spread throughout most of North America, except for Utah and a few states…

If I told you that a wild edible plant was used as a substitute for both egg whites and okra, you’d probably think, “That’s crazy!”, but common mallow can indeed do both. We’ll share how to identify this common weed and put it to use for food and medicine.