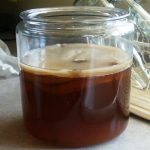 Making homebrew kombucha is easy, once you have a kombucha culture, also known as a scoby (Symbiotic Colony of Bacteria and Yeast). My first scoby came from another homeschool mom in my natural foods co-op. Before I started brewing, I re-read the info I had on kombucha from Wild Fermentation and Nourishing Traditions. I paid my friend a quick visit, and brought home two new scobys safely packaged in a covered pyrex container. And then – my scoby sat in the fridge. (Which, BTW, is not the best thing for a scoby. Store them at room temperature with enough liquid to cover. A large mason jar works quite well.)

I was excited about the concept, but the original brew I smelled reminded me of a combination of old socks and vinegar. This made me a little nervous. I had a heck of a time tracking down an appropriate container to brew in – very few things come packaged in glass anymore, and I really didn't need a gallon of olives. Finally, I found some nice gallon containers at Walmart. They had a lid that I didn't need, but the ridge around the top was handy for holding the rubber band in place that kept the cloth covering the brew in place.

No more excuses – old sock smell or not, it was time to take the plunge. I used the recipe from Wild Fermentation, shown below. I make three quarts at once and ferment them in a gallon container. If you don't have a neighbor with a scoby, I recommend fresh cultures from Kombucha Kamp.

How do you know when the kombucha is done?

I followed the instructions, and low and behold a week and half later I was staring at the brew in the top photo. Floaty thing – check. Acidic – check. Drinkable – check. Tart, with a slight vinegar taste, but no old socks. Still, I like the fancy flavored brews in the store, so I decided to experiment a bit.

I fished out the scoby.

This thing really does look a little gross, like a rubbery piece of old, mysteriously white meat, of maybe blubber. The blob in the bowl is the original, the new growth is in my hand – fat and healthy.

Straining chunks – I wasn't ready to face those yet.

I flavor the kombucha after the initial brewing, when I remove the scoby and put the kombucha into bottles. You can use flavored teas for brewing, but not those that contain essential oils (like Earl Grey). They may damage your scoby. With this batch I tried 1/4 cup apple cider per bottle in two bottles, one with some blueberries, and one with some raspberries. I didn't measure the berries, I simply loaded them in until they covered the bottom of the bottle.

Leave bottles on the counter for a couple days produce more bubbles, refrigerate for a sweeter brew.

In addition to the above flavors, I've also tried straight blueberry juice, grape juice, honey and ginger (about a tablespoon of each per bottle), and Ghirardelli Double Chocolate Hot Cocoa mix. So far I think my favorite is the blueberries, but all are tasty. It's fun to munch on the bubbling fruit at the bottom of the bottle.

The chocolate was a hoot. I got a little nervous because the powder formed an obstruction at the top of the bottle and didn't appear to blend in well. When I finally popped it open (after almost a two week ferment), the carbonation had built up so much (because of the high sugar content) that it blew the foamy chocolate snake right out of the top of the bottle. So much for the bottle getting blocked. Most of the sugar was gone by this point, so the flavor was more like straight, strangely effervescent unsweetened cocoa, but it was still pleasant, and highly entertaining. I think the ginger could use more ginger, but I'm not sure how much. Suggestions are welcome, along with suggestions for other flavors.

So why the heck am I bothering with all of this? Sure it tastes good, but it's also good for you. From Kombucha Cultures:

The intestinal microflora is carefully balanced. The human gut is home to around 400 different species of good and bad bugs. However, the good bugs have to share their environment with bad bugs such as Salmonella, E.Coli and Clostridium. The way to balance between good and bad bacteria is to maintain good digestive health, creating stable “microflora”. It is generally recommended that probiotics are taken on a daily basis to create this balance.
Prescription medicines, stress, sickness and especially antibiotics can all disrupt the bacterial balance because as well as killing off the bad bacteria they allso kill off the good bacteria. So you need to restore balance. Probiotics need to be taken regularly to maintain levels of good bacteria. Lactobacillus or lactic acid bacteria is a faciltative bacteria, named as such because most of its members convert lactose and other simple sugars to lactic acid. They are present in the gastrointestinal tract and the vagina. The production of lactic acid makes their environment acidic which inhibits the growth of some harmful bacteria. Large populations lactic acid-producing bacteria regulate the levels of friendly bacteria and reduce the levels of toxic pathogens which cause ill health. Resulting in Kombucha being one of the best skin treatments for acne and an arthritis health drink.
Even though the beverage is acidic, it does not cause any acidic condition in the stomach; it facilitates and noticeably promotes the digestion. The “yeasts” found in the Kombucha are of a beneficial kind. Organic Kombucha Tea is considered by some as a delicious ‘Cancer Foods' or as a natural alternative ‘herbal nutrition supplement'.
By altering the pH of the large intestine to a slightly more acidic level, putrefactive bacteria (those bad for your health and causing foul wind production) tend to be inhibited or destroyed. There is no kombucha danger, It will cause no harm to have even ingested Kombucha mushroom. The pH is altered by active good bacteria producing high levels of lactic acid. The presence of this and other acids inhibit the growth of undesirable bacteria, molds, mold spores and yeast, particularly the Candida form.

More Posts in the Kombucha Series

I enjoy trying new twists on old favorite recipes, and right now our local rhubarb is abundant, so when I found this naturally sweetened strawberry-rhubarb jam, I had to try it. This rhuberry spread recipe has only 4 ingredients and contains no added sugar or commercial pectin. It’s sweetened with apple juice concentrate and thickened… 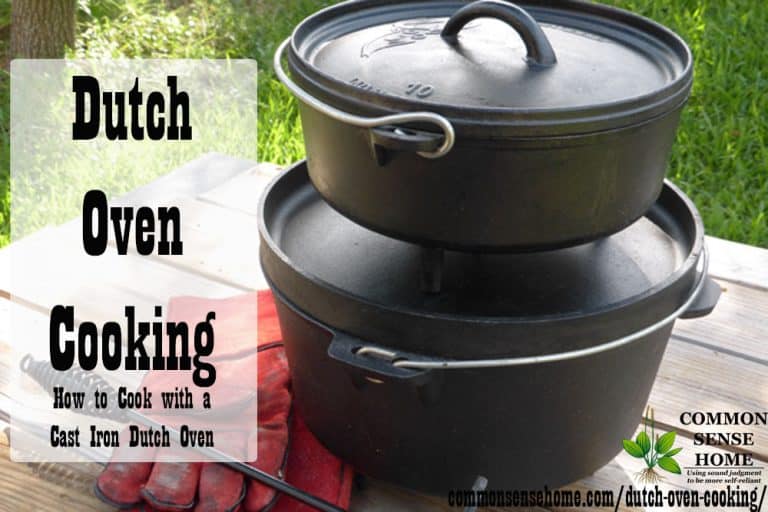 This is a guest post by Jennifer Osuch. I love cooking with cast iron – especially Dutch oven cooking. Dutch ovens are durable and versatile. They allow you to cook a wide variety of foods under many different conditions. In this post, we’ll talk about different types of Dutch ovens and how they are used,…

These tigernut chocolate chip cookies are a uniquely delicious take on America’s favorite homemade cookie. We first gave these a try for New Year’s Eve, when we had friends with food allergies visiting. Since then we’ve made them a number of times using different sugars and different fats. The texture changes a bit, but all…

Bean and lentil recipes can be a frugal and nourishing addition to just about any menu – but – believe it or not – I’ve only cooked about a handful of different bean recipes. My mom rarely used them, so I never picked up the habit. My friend, Pat, from Heal Thyself, suggests a cup…