How do you go about flavoring kombucha? I add fruit/juice/other flavoring after the initial brewing, when the scoby is removed and the kombucha liquid is placed into bottles or jars. You can also brew with flavored teas, although those that contain essential oils (such as Earl Grey) should be avoided. Many essential oils have anti-bacterial properties that can damage your scoby. After bottling, let the jars/bottles sit on the counter for a day or two and then I refrigerate it.

Time on the counter increases the carbonation. If it is warm/hot the fermentation will proceed rapidly, and carbonation will build up quickly. In winter, I might leave it out for two days, in high summer, one day or less. Refrigeration slows the fermentation process and makes your bottles less likely to fire off like a rocket when opened.

When I first began brewing, I did a lot of hunting around on the internet looking for information on how to flavor kombucha. I didn't have much luck. It seemed like the people who were doing it just did it, and it was a given that you should know how to do it.

To that end, I'll share my kombucha flavoring ideas. One of the things that I like best about kombucha is that you can stick fruit in the jar for flavor and forget it, unlike kefir soda where the fruit needs to be strained out. I don't measure my fruit, I just keep stuffing pieces in until the bottom of the jar is covered, plus a bit more.

Neither the peaches nor the pears were very good. They just didn't have a very strong flavor. The peaches were a little better than the pears.

I've also used fruit juice, between 1/4 and 1/2 cup per bottle. I actually prefer just the plain fruit myself, but some people don't like the fruit chunk floaties in their drink.

This knocks the pants off the dried fruit version. I've been using less coconut water, since I found out that some companies are harvesting the green coconuts for their water, which is negatively impacting the coconut oil supply. (Not sure which companies use mature coconuts – need to make time to research this.)  Fresh coconut water and/or coconut meat really adds and amazing extra punch of flavor.

If you need a kombucha SCOBY or brewing equipment, I recommend Kombucha Kamp.

When my sister was bottling her first batch, her brother-in-law stopped by for a visit and asked what she was doing. She explained and offered him a glass of her brew. He drank it down, and then asked how quickly it should have an effect. He then told her that he had had a stomach ache for the last four days, but after he finished his kombucha his stomach finally stopped hurting. My thought on this is that he may have been suffering from low stomach acid, and the kombucha, being acidic, could have very quickly helped with this.

The other story is a little more graphic. Don't read on if you don't want to know about bodily functions. A friend of mine, who has been on a variety of prescription medications for years, had the urge to consume a large quantity of kombucha (around one quart, straight down the hatch). I normally wouldn't recommend this large of an amount to someone who was just starting out with kombucha, but I have read that they used similar amounts, given daily, to treat hospital patients over in Russia. After drinking the kombucha, the next time he paid a trip to the bathroom he passed a very black, almost tar-like stool. Afterward, he said his energy levels felt better than he had in some time. He started brewing kombucha. Hopefully, between this and making other dietary changes, he will continue to see improvement.

I've come to enjoy this bubbly drink, and consume it regularly with meals. I haven't noticed any dramatic results personally, but I anticipate continuing to brew and drink it for years to come. Your guts tend to slow down as you age, so this is a good way to give them a little”jump start”. Consumption of probiotics also helps you ward off infection and illness.

Do you have a kombucha story you'd like to share? If you have favorite flavor combos, please let me know. Happy brewing!

Other posts in the Kombucha Series

You can make fresh mozzarella cheese at home – with just four ingredients! Use your homemade mozzarella to make mozzarella balls from scratch, or stretch it into homemade string cheese. This posts features the “30 Minute Mozzarella Cheese” recipe from Ricki Carrol’s book “Home Cheese Making“. If you’d like to make traditional mozzarella (which takes a…

20 million American people, mostly women, suffer from thyroid related diseases. Out of these 20 million only 50% have been diagnosed. This means there are about 10 million of us who might be undiagnosed and misdiagnosed. This results in an ongoing struggle with unexplained weight gain, fatigue, depression and infertility. Today’s medicine answer to thyroid…

These easy to make sourdough brownies are a great way to use sourdough discard. With one bowl, one pan, and about 30 minutes, you have rich, fudgy brownies. 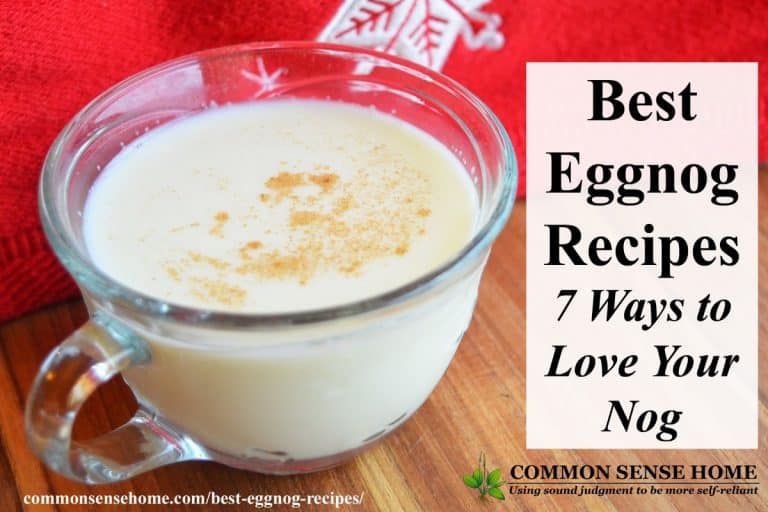 For me, the best eggnog recipes are the ones you make at home. When I was a little girl, mom would make eggnog as a special treat when we had a bounty of eggs (we had a dairy farm and raised our own chickens). I never remember her measuring – she always just threw some…