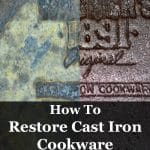 It takes a little effort to restore cast iron cookware, but it's worth it. This post covers cleaning and restoring cast iron with step by step photos. We'll help you strip and reseason damaged and rusted cast iron cookware so it looks and cooks the way it should. (Plus you'll see why vintage cast iron is best!)

I'd like to tell you a quick story about one of my early experiences with cleaning cast iron, and why restoring cast iron means so much to me.

I cringe a little every time I see bad rust on a cast iron pan. Yeah, it's kind of nasty looking but that's not what bothers me.

When I was first married I had a cast iron pan and my husband, after cooking breakfast for me, left the pan soaking in the sink. Yes, you read that right, he left it soaking.

As a young girl who thought men should just “know better” you can imagine the argument that followed. What was worse is that I had no idea how to fix the pan –  there was no internet to speak of at the time, and I wound up throwing it away. So those rusty pots and pans remind me of a time when I made a few more mistakes than I do now.

Now, that I know better,  when I see those neglected pots or pans I have an overwhelming desire to take all of them and show them love and affection and help them “look and cook” like they they were intended to.

A little like marriage, it takes a little time and a bit of work to restore cast iron cookware, but it is really worth the time and effort!

Here are three old cast iron skillets I found at a yard sale that need to be stripped and re-seasoned. There are two modern Wagners and one Lodge. They are not high quality collectible pans (more on that in a minute) but they are worth restoring and will make fine frying pans.

Stripping the Cast Iron Before Reseasoning

The second option to try if you don't have a self-cleaning oven would be to try an outdoor grill. The temperature needs to 500 F° to burn off the coating (or patina), but it needs to be consistent so a grill could work depending on its capabilities.

Another option is to use an oven cleaning spray. It's messy, hazardous and I would try and make a new friend with a self-cleaning oven before I would try it, but some people do strip old seasoning off cast iron using these chemicals.

The cookware only needs to be in the oven or grill for about 2 hours. Honestly, since my oven does have a self-cleaning option and automatically locks I just let it complete the cycle which takes about four hours.

If you were going to do a lot of stripping you might want to only do the two hours to save energy, and if you're working in a warm climate to not have your house heat up. Let the cast iron cookware cool down completely before going on to the next step.

Here is what the smaller Wagner looks like after the self-clean cycle. There is orange stuff that kind of looks like rust but it's actually the seasoning that's been burned off the pan. Like what's left in the bottom of a dirty oven after you've had it on self-clean.

You will need to scrub the pans. I use whatever scrubbing pads I have around but you want something that will scour. This is not a job for the non-scratch pads. A wire brush that you might use on a grill will work too. They even have chain mail scrubbers specifically designed for cleaning cast iron.

I'm not going to lie, you have to really scrub and scrub and probably scrub some more. It depends on how bad the cast iron was to begin with. You'll see that the stuff that looks like rust washes off.

Scrub the cookware until it's clean. It may take a good 15 to 20 minutes per piece. Then pour chilled water over the cast iron for the final rinse to prevent flash rust.

It's fine to use soap at this point, even though you've probably heard to never use soap on cast iron cookware. That only applies to seasoned cookware, where you want to protect the seasoning or patina on the pan.

Here we are completely stripping any seasoning off the pan so soap will not hurt the cookware. Learn more about how to wash cast iron cookware here.

Smoothing Out the Surface of Modern Cast Iron Pans

As I mentioned before these pans were manufactured relativity recently, after the 1960's. So they don't have as smooth a surface as the older more collectible pieces. To smooth out the surface you can use a wire brush like this one that attaches to an electric drill. You can find the drill attachment at most home improvement stores.

You'll want to run the drill over the cooking surface several times to smooth out the cookware. That's basically all there is to getting the cookware ready to re-season. Be sure to wash your cookware again after you use the wire brush on it.

To re-season cast iron, coat with a high heat oil. Wipe off all the oil with a lint-free cloth. Place in a 300 °F oven for 15 minutes and then take out your pieces and wipe all the oil off again (don't skip this step or the oil might pool on the cookware).

Then place the pieces back in a 400 °F oven for 2 hours. To learn more about re-seasoning cast iron cookware go here.

The Difference Between Old and New

At the same yard sale where I found the more recently manufactured pieces I also found these pieces. One is an unknown but the other two are old Wagners. So I thought I would show you the difference.

I'm not going to go into great detail about how to “collect” cast iron. There are entire websites devoted to the subject and I'm really not an expert.

However, to find one of those super smooth pans that eggs or pancakes won't stick to you might have to either spend a lot of time with the drill brush or look for a pan that was manufactured in the 1960's or before.

So let me show you the difference. First you might notice that these pans are in better shape than the first set. Someone obviously took care of them for awhile and cooked with them too. However, they do need to be stripped because of rust and sticky spots.

Also, I'd just feel better getting down to the bare metal. Who knows what's been cooking in them… yes, I'm a little bit of a germaphobe.

You can see right away that the patina was much thicker on these pans than the first set. This is a shot right after the self-clean cycle.

Here are the cleaned-up unseasoned pans. The cheaper, more recently manufactured set on the left and the older ones on the right. Even in this picture you can see the difference in the smoothness of the cooking surface.

Here is a close up of the recently manufactured pans. The cooking surface is rough. The pans are a lot smoother after being hit with the wire brush on the drill but it will take a while to get them smooth enough for eggs not to stick to them.

Here is the back of the recently manufactured Wagner. You can identify most cast iron from the markings on the back.

The fun part is when you encounter a piece that is in such bad shape that you can't make out the markings. Then you have a mystery on your hands.

You could get lucky or  you could be a little less fortunate. Even though this says 1891 it was actually manufactured in the 1990's.

Here is the surface of the older pans. It's pretty smooth. There are still remnants of the old patina even after heavy scrubbing so I might give them another round of the self-clean cycle in the oven.

See the difference in the logo? It still says Wagner but it's a different older style logo.

Restoring Cast Iron is Not That Difficult!

Restoring cast iron is really not that difficult. You just need a little patience and some elbow grease. Restoring an old piece of cast iron can save you a few bucks, since people who own pieces in need of restoring are often anxious to get rid of them. (Their trash is your treasure!)

Restoring cast iron keeps old pieces out of landfills, so it's a green choice. Not to mention, a restored piece makes a great gift. Plus, if you are like my husband, and just enjoy the hunt to find great pieces, it's fun to take a piece home and clean it up to see if you have collectible. I almost forgot to mention – he doesn't soak cast iron anymore. We fixed that problem.

You may also enjoy the post Natural Stove Cleaners and the other posts in this series: