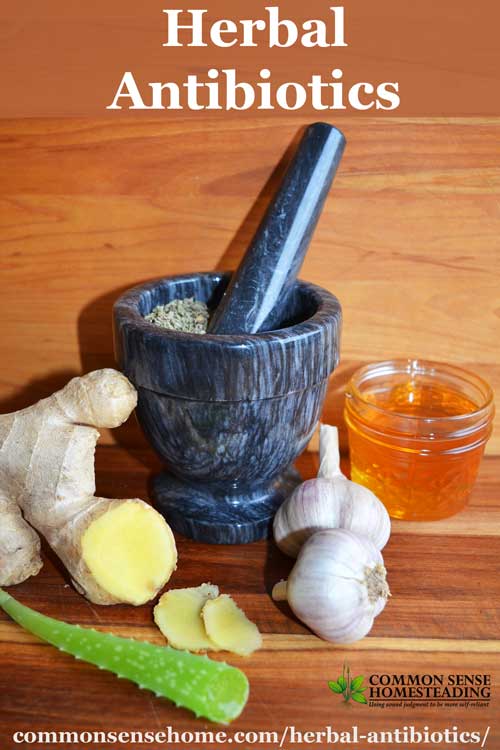 Herbal antibiotics have long been used by herbal healers to ward off colds and flu, clear infections and speed wound healing. Now, they may be moving back into the mainstream as an alternative for bacteria that have become resistant to synthetic antibiotics. This post is based on the book “Herbal Antibiotics” by Stephen Harrod Buhner, and related materials. We’ll start with some background information and then discuss antibiotic herbs and their use.

Note: Not all bacteria are harmful – many are essential to our health and well-being. Always exercise caution with the use of herbal antibiotics, just as you would with pharmaceutical antibiotics. In food doses, they are generally benign, but in therapeutic doses they can have side effects just like any medication. Please see a trained healthcare provider for severe or prolonged illness or injury.

What is an antibiotic?

MedicineNet.com defines an antibiotic as:

A drug used to treat infections caused by bacteria and other microorganisms. Originally, an antibiotic was a substance produced by one microorganism that selectively inhibits the growth of another. Synthetic antibiotics, usually chemically related to natural antibiotics, have since been produced that accomplish comparable tasks.

Most of us think of antibiotics as liquid or pills you pick up at the pharmacy, but antibiotics were originally developed from naturally occurring sources. Plants have antibiotic substances serving a beneficial roll around their root systems. Bacteriophages are viruses that infect bacteria. (Everything has something that wants to eat it.) Many common foods and herbs (and some not so common ones) act as antibiotics, such as honey, garlic, onions, licorice root, ginger, sage and many others.

How do bacteria become antibiotic resistant?

Antibiotic resistance is a genetic trait, like brown hair or green eyes, but unlike these traits, antibiotic resistance transfers very quickly between one bacteria and another. Somehow (and as I understand it, scientists are still trying to figure this out) bacteria communicate with each other extremely rapidly, and through this communication they are able to transfer survival traits.

The TED talk below by Bonnie Bassler gives examples of some of the rapid communication abilities of bacteria.

In a study by Dr. Stuart Levy and his colleagues, they found that introducing antibiotics into chicken feed very quickly promoted the spread of antibiotic resistant bacteria in the chickens’ intestinal tracts, as well as the intestinal tracts of the people working with the chickens. The chickens’ guts changed within a week, the farm workers in 3-6 months. Further, the bacteria sampled were not only resistant to tetracycline (the antibiotic used), but several other commercial antibiotics – they had learned and adapted. (Personally, this freaks me out.)

The good news – after they stopped using the antibiotic laced feed for six months, no detectable levels of tectracycline resistant organisms were found in the farm workers. Read more about this study at “The Spread of Antibiotic Resistant Bacteria from Chickens to Farmers“.

Many pharmaceutical antibiotics are isolated chemical constituents. They are one compound/one chemical – penicillin is penicillin, tetracycline is tetracycline and so on. This makes them easier for bacteria to adapt to and counteract.

In contrast, herbs are much more complicated. Garlic has over 33 sulfur compounds, 17 amino acids and a dozen other compounds. Yarrow has over 120 identified compounds. (This makes me look at my herbs with a new appreciation.) In plants, the whole appears to be more than the sum of its parts. The different compounds work together, often to produce better than expected results. (See Chapter 2 of Herbal Antibiotics for a more detailed explanation.)

Stephen lists the following as his top 15 antibiotic herbs. I might also add cinnamon (perhaps it’s been added in his second edition, which I haven’t had the pleasure of reading yet).

The use of each of these is detailed in the book. I’ll share a few that I use regularly. (The post Honey as Medicine goes into detail on the use of honey.)

Aloe – Long Used for Burns and Other Skin Trauma

Aloe vera is active against Staphylococcus aureus, Pseudomonos aeruginosa, and herpes simplex virus type 1 and type 2. Honey and aloe vera are two of the most effective treatments for burn victims when applied externally to speed wound healing and prevent infection. To use aloe, simply slice open the leaves of the fresh plant to get at the sap and apply the aloe gel to the wound or burn until well covered, repeating as necessary. You may also juice or puree the pulp for internal use. (Read more about medicinal use of aloe.)

Garlic make be taken fresh (as juice or as cloves), in capsules, as tincture, or in food. Start with small doses and gradually increase. Raw garlic may cause stomach upset and even induce vomiting, so be careful. Small, frequent doses are generally easier to take than large doses (1/4 to 1 teaspoon juice as needed). Capsules may be better tolerated and easier to take. Ample garlic in food is also helpful. Watch out for garlic and blood thinning medication.

Echinacea is active against Staphylococcus aureus, Streptococcus spp., mycobacterium (tuberculosis), abnormal cells (direct application necessary). Stephen particularly recommends it for abnormal pap smears, strep throat, and very early onset of colds and flus. For strep throat and heading off colds and flus, he recommends the use of echinacea tincture, 30 drops (full dropper) each hour. I have also had success fighting off a cold with a steady stream of echinacea tea.

Licorice is a powerful immune system stimulant and antibiotic, and works well with other herbs. It does have side effects, especially with overuse. Stephen notes, ” I have found in practice that the use of the whole root does in fact produce fewer side effects than the extracts. However, some of the same side effects still occur: higher blood pressure, water retention. These occur with less frequency and generally occur in those of middle age – i.e. those who have gone through menopause. I have used licorice for over 20 years now and find the herb moving more and more into the drug category for me due to its potency. Should be used with caution in those with high blood pressure.”

I’ve used licorice root in tea, and as part of this herbal sore throat syrup. Stephen advises a tea using 1/2 to 1 teaspoon powdered licorice in 8 ounces of water, steeped for 15 minutes and drained, up to three times per day.

There is much, much more to learn about herbal antibiotics, but I just wanted to give you a brief overview and let you know that herbs can be effective remedies, sometimes even for infections that don’t respond to “standard” treatments. Always exercise caution when using herbs as medicine, and be doubly careful if you are on any prescription medication.

I have also found that regularly eating live cultured food such as yogurt and raw sauerkraut, as well as supplementing with probiotics (especially if you have used pharmaceutical antibiotics) can help rebuild populations of healthy bacteria in your body.

You may also enjoy our other Herbs and Wildcrafting and Natural Health posts including: