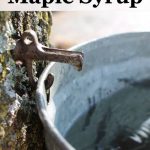 This is a guest post by Bette Lambert of Silloway Maple.

Maple syrup is a delicious, healthy alternative to refined sugar, and is enjoyed on the table as well as in many recipes. It's simple to make maple syrup in the backyard, though once bitten by the sugaring bug, many go on to expand their operations!

Note:  If you're here from the “50 Things You Should Make Instead of Buy” article, we do have a quick and easy homemade maple syrup substitute at the bottom of the page.

#1:  Identify Maple Trees and Wait for the Right Temperature Range

There are many species of maple trees. The sap gathered from all of them can be boiled down into syrup.

Most syrup is produced in the northern states, but can be made as far south as Tennessee.

The temperature must drop below freezing at night and rise above during the day for the sap to run. Trees should have at least a twelve inch diameter before being tapped.

When the maple trees start budding, sugaring is over, as the sap produces bitter syrup.

To tap the trees you will need a drill and bit, and a hammer. The minimum that a backyard sugarmaker must do is to drill the taphole and tap in the spout.

To collect the sap:  Milk jugs or even plastic bags can be hung on the spout; or plastic, food-grade tubing can be connected to the spout and the sap run into a bucket or collecting tank on the ground.

To boil the sap into syrup:  Plan how you will boil the sap – a simple pan on the stove, a turkey fryer, an outside set-up over a fire-place, or a larger, purchased arch and evaporator.

Editor's note:  a friend of mine cooked her maple syrup down in her kitchen – once. It left a sticky film on every surface. I highly recommend processing outside or in a sugar shack.

Tap the trees in the early spring, as daytime temperatures rise above freezing. Drill a hole the size of your spout, at a slight incline. (Note angle above.)

Tap the spout into the hole firmly, hang the bucket, and put the cover on to keep out rain and bugs. This is the magic moment, as the first drop of clear, sweet sap runs off the spout – often onto an eagerly waiting tongue!

Sap is perishable, and should be gathered and boiled daily, or kept cold in a storage container until boiling. Filter the sap to remove any impurities.

Boil the sap until it reaches seven degrees above the boiling point of water on that day, or until it “aprons”, or runs off a spoon in a sheet. You can also test to see if your maple syrup is ready by using a hydrometer. (See Syrup Hydrometer Instructions to learn how a hydrometer is used for syrup making.)

Whenever maple sap is boiled, it tends to foam up and boil over the side of the pan. Rubbing a little butter around the rim of the pan, or dripping in a few drops of milk or dairy cream during boiling will keep the sap or syrup from boiling over.

My Dad always said, “Never turn your back on boiling sap!” The amount of milk is just a few drops to any size kettle, though dripping in a few more drops is more frequently needed with a larger quantity.

Sugar on snow is made by boiling pure maple syrup to 233 degrees, on a candy thermometer. Do not stir.

We drizzle the hot syrup over pans of packed snow-or directly onto fresh snowbanks! Each person is given a fork to twirl the taffy-like candy up on.

Those in warmer climates may use purchased maple syrup and pour it over crushed ice.

We produce maple cream by boiling it to the soft ball stage, cooling it without moving to room temperature, and whipping into a smooth, creamy spread.

Candies, traditionally shaped in molds as maple leaves, are made by boiling the syrup to 243 degrees, and then stirring the syrup while it is hot and pouring into molds before it sets up.

My children used to boil the syrup, and then roll the candy into little balls, pressing in nutmeats. A wonderful treat, made from their big sugar maple in the yard.

#6 – Filter and Bottle the Syrup

Filter the hot syrup through clean wool or synthetic syrup filters to remove niter, or sugar sand. Niter occurs naturally. It is gritty and gives the syrup a cloudy appearance.

Syrup is canned in Mason jars, commercial syrup containers, or kept in either the refrigerator or freezer.

At Silloway Maple, we can our syrup in glass and in plastic jugs by heating it up to 180 degrees. We leave no head space and do not process it in a canner.

The syrup keeps indefinitely, though some say the flavor is best preserved for long periods by freezing. It does not expand, when frozen, like cider.

Once the container has  been opened, it should be refrigerated. If any mold does form on your syrup, it is harmless and can be removed by gently heating and skimming off.

How to substitute maple syrup for sugar (works for most recipes):

Maple granola is one of our family favorites, and is very easy to make.

Combine the dry ingredients in a large bowl. Mix the oil, syrup and vanilla in a separate bowl, and pour over the oat mixture. Mix well, and spread on baking sheets.

Bake in 300 degree oven for two hours, stirring occasionally. Remove from oven, and add  raisins or any additional dried fruit. Store in a tightly closed container.

While maple syrup is a sugar and should be enjoyed in moderation, it does contain naturally occurring minerals such as calcium, manganese, potassium and magnesium.

Why are these compounds important?

A quote from the article linked above notes, “We know that the compounds are anti-inflammatory agents and that inflammation has been implicated in several chronic diseases, such as heart disease, diabetes, certain types of cancers and neurodegenerative diseases, such as Alzheimer's.”

The researcher (Seeram) further concludes, “I can guarantee you that few, if any, other natural sweeteners have this anti-oxidant cocktail of beneficial compounds.”

Learn more in the post “Maple Syrup – 6 Things You Need to Know“.

I hope this post will encourage you to make maple syrup, and that it will become a tradition for your family like it is for mine.

If you don't have access to maple trees, we do sell Pure Vermont Maple Syrup, Maple Cream and Maple Sugar Coated Nuts in our online store, or you can visit a local producer near you to enjoy some real maple syrup.

This is a guest post by Bette Lambert of Silloway Maple in Randolph Center, Vermont. Bette is the mother of six children, all homeschooled. She is a maple sugarmaker and homemaker.

Silloway Maple is family owned and operated. They recently built a new solar-powered sugarhouse, which also produces part of the energy used on the family dairy farm.

Daughter Laura manages the business Facebook page, Silloway Maple, where you can view photos of their sugarhouse, as well as an extensive library of maple syrup making photos.

For more information on how to make maple syrup and other maple products:

Want to stock up on syrup? Learn how to store it for best shelf life.

For those of you visiting from the “50 Things You Should Stop Buying and Start Making” post who don't happen to have maple trees available and were looking for a quick and easy homemade maple syrup substitute.

For those who want to make maple syrup substitute at home.

Adapted from All Recipes.com

Bring the water and sugars to a boil in a saucepan over medium-high heat. Reduce heat to medium-low, and stir in the maple extract; simmer 3 minutes longer.

Use immediately, or store in a mason jar in the refrigerator for up to two weeks. For a thicker syrup, use two cups brown sugar. You may also substitute 2 cups sucanat (less refined cane sugar) for the sugars. Makes 2 cups of syrup.

We’re going to give you the information you need to choose the right greenhouse option for you. We’ll talk about costs, types of greenhouses, location, and planning for operation.

Part memoir, part reference, The Encyclopedia of Country Living is a labor of love written and rewritten for over 30 years by Carla Emery. The subtitle on the front cover states: Practical advice, invaluable information, and collected wisdom for folks and farmers in the country, city, and anywhere in between. Includes how to cultivate a…

Beekeeping for Beginners by Amber Bradshaw shares tips and ideas to help you create a backyard bee haven. From beehive selection to honey harvest, and everything in between, Amber walks you through step by step. You’ll have all the information you need to decide if beekeeping is right for you.