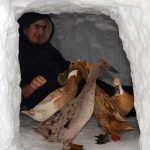 Since our little crew of duckies has become a big part of our lives, I wanted to formally introduce them and tell a little about their story. We'll also use this page to answer some basic duck questions, and share some duck videos for those who need more duckie time.

Our Crew of Runner Duckies

In late July 2017, our crew of runner ducks arrived from Murry-McMurray Hatchery. Since we knew we wanted to train the group for pest control in the garden, we opted for one male and four females. That way we didn't need to butcher or rehome extra drakes, and the ladies would be providing eggs as well as pest control.

Our crew consists of:

The novelty of picking up live poultry at the post office never gets old. People always questions about the noisy, peeping box. I wish I had taken more photos and video when they were tiny. They grow so fast! They also move so fast, which makes getting good photos tough.

After spending their first few days inside, the duck patrol graduated to a section of the coop, sharing space near the chicks, who arrived a week earlier. Eventually, both groups got bigger, and the ducks were moved into a portion of the garden shed attached to the coop. The chickens took over the whole coop space.

We started the duckies with short trips outside in the garden and in the greenhouse with us. They learned to follow us around the yard. As they grew, most mornings would be spent out running around, with time in the duck tractor midday, and then more free range time before bedtime. We taught them to respond to a whistle, so it's easy to gather them and get them inside. (I'll add a dedicated post on duck training in the future.)

We also pet them and handle them each night at bedtime, to make sure they are used to being handled. This came in very handy this week when we discovered an odd growth on the side of Miss Blue's foot. She's been so patient through all the vet care. I couldn't have asked for a more well-behaved duck. At this point we hope it's a strange looking case of bumblefoot, and are treating accordingly. We'll have more on that in an upcoming post, too, as we learn more during treatment.

There's been a running joke on Facebook with a friend of mine, who refers to his current home near Green Bay, Wisconsin as”Ice Station Holstein”, during our long Wisconsin winters, as a hat tip to the cold and our being in the Dairy State. During the blizzard of April 14-15, 2018, I started doing updates on our status, referring to our home as “Ice Station Duck Patrol”. (Named after our duck crew.)

Now – a little more about the Duckies we love, the Duck Patrol…

Buff is a sweetheart. He's always inquisitive, and protective of the ladies. He chases the cats around the yard if they get too close, and is suspicious about any strange noises or movements.

Sometimes he's a little bit of a dork, like when he hops on top of one of the ducks to mate, and instead stands there, quacking and flapping his wings while she looks annoyed. After a successful session of duckie nookie, he runs around the yard or swims around the pond like he's doing a touchdown dance.

Somehow he's learned to mimic a human whistle (no easy feat when you don't have lips). He knows that whistle time means treat time, so he now whistles in an attempt to get extra treats. (Yes, sometimes it works, because he's so blasted cute.)

You can tell Buff from Fawn because of his bright orange bill, his husky quack, and the curl at the end of his tail.

Miss Fawn is quiet, but she has a sparkle in her eyes. She watches everything, and sometimes surprises you with her spunk, like when she bit Big Fluffy's tail. (Big Fluffy is our big orange Maine Coon cat.)

She and Buff were the first duckies to pair up, and I think he still likes her best. Fawn often looks like she's slightly frazzled, as she's more interested in playing in the mud than grooming.

Miss Blue is the biggest of the ladies, and is about the same size as Buff. She's spunky and chatty, and has no trouble walking up and asking for extra snacks.

Whenever it's time for meal worms, she's first in line, and jumps right in the tub of water when we sprinkle worms in for the ducks to nibble. Her signature quack sounds like a musical, “Quack-a-lack-ah!” She's been amazingly well behaved through all the care of her injured foot.

Miss Chocolate is the smallest of the duckies, but she has a will of iron and a bossy quack to enforce it. She reminds me of one of those tiny old grannies who keeps her house “just so” and fusses over the grandkids, but woe betide anyone who messes with her family.

She convinced all the other girls to lay in the nest spot that she selected, and she stays on the nest for several hours each night. When morning comes, she carefully tucks all the eggs in and arranges the nest just the way she likes it.

Her signature quack is a loud, strident, “QUACK!” More often than not, she's the one who determines where the duck patrol will go next outside, and when it's time for them to come home for food and bedtime.

Miss Emerald was quieter, more like Miss Fawn. We originally called her Blackie when she was tiny, but once she got her mature plumage, her beautiful wingtips really shined. My youngest had a discussion with her, and told me that she preferred the name “Emerald” to “Blackie”, so Emerald she became. (Yes, he is the Duck Whisperer.) Emerald is more of a girly-girl type, with feathers primped and preened to glossy perfection.

She gave us a little bit of a scare recently when she started laying soft shelled eggs. I found one egg out by the pond with an odd “tail” and very soft shell. The next day, we saw her lay an egg in the yard with a shell that was so soft that it busted on the way out of her bum. Then she didn't lay for a couple of days, and we began to wonder if everything was okay. Finally, she laid two eggs in one night. She went back to her normal laying schedule for a time, and then she stopped laying in fall before the other ducks.

We noticed that her profile changed and she was drooping in her abdominal area. She was also having trouble breathing. After investigating, we determined she had ascites, or water belly. You can read more of her story in the post “Treating Miss Emerald for Water Belly“. Since her treatment, she regained her vigor and become a much louder ducky. She and Chocolate have “quack offs” to see who can be the loudest.

We've put a few video highlights here, and will be adding more as time allows. Some will be informational, others are just for the fun of watching duckies.

They always make me smile, so I hope you enjoy them, too. (If you can't see the videos, make sure your ad blocker is off.)

The coop camera catches duckies on the nest.

Here's the bedtime routine for the duckies.

Your Questions About Duckies Answered

Where do ducks live?

Our ducks live in a duck coop, but wild ducks live near water. Most ducks are fairly cold tolerant, although some breeds less than others.

Our runner ducks, for instance, aren't very comfortable outside once the temps drop into the low 20s. Most ducks don't roost like chickens (except Muscovy ducks).

Ducks need food, water and protection from predators. It's best if they have a large enough basin of water that they can fully submerge to wash. (Duckies LOVE water.) Our duckies visit the pond daily, even when it's icy cold.

At a minimum, duckies should have water deep enough that they can submerge their bills and clean their nostril holes and bills well. I help butcher a small flock that was raised with only a drip waterer, and the birds were in poor condition with improper oil gland development.

Is a duck a bird?

Yes, duckies are indeed birds. You'll notice their fluffy feathers as soon as you take a closer look. They are warm blooded animals, and lay eggs. Like other birds, ducks are believed to be descended from dinosaurs and other reptiles.

What do ducks do all day?

It depends on the duck, but our runner ducks are very active. They patrol the yard from one end to the other, investigating every corner in a search for bugs and other tasty things to nibble. They also enjoy swimming in the pond, and twiddling in puddles.

As we go through the day, everyone who's at home helps keep watch on the flock. They move so fast around the yard that it's like an ongoing game of hide and seek. We check their food and water morning, midday and evening, to make sure everything is fresh, clean and well-stocked.

Anyone with ducks and wet ground can tell you that, while ducks don't dig like chickens, they can burrow their bills into soft ground and make pretty big holes if they are in a moist area for too long. The bigger the flock, the bigger the mess is likely to be.

Back on the farm, the area where we fed and watered the ducks and geese always turned into a muddy mess as the season progressed, even though they free ranged around the property the rest of the day.

Here, with a small flock, we move their feeding and watering area slowly around the yard to avoid tearing up the turf.