/ Gardening / Duck Pest Control – Working with Ducks in the Garden 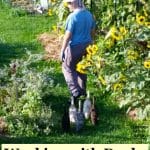 I read a permaculture article that said slug issues in the garden weren't due to too many slugs, but to a lack of ducks. That's what triggered the purchase of the Duck Patrol. Some of you know our duckies from other posts or their Instagram feed. In this article, we'll talk specifically about using duck pest control in the garden. We'll share why we chose the breed that we did, how to train your ducks, and tips for managing your pest control crew.

Runner ducks are my favorite duck breed for pest control. With a quick online search, you'll find examples of them being used for pest control in vineyards and rice paddies. They love to forage, and are also some of the best layers. Anconas, Campbells, Welsh Harlequins, magpies, runners, moscovies (technically not ducks) and various bantam breeds are also good foragers.

As a smaller, lighter duck breed, runner ducks are less likely to smash and damage plants while moving around. Because they don't have the weight to maintain of the bigger duck breeds, less supplementary feed is needed. They are not extremely cold tolerant, but there are few bugs for them to find in winter. Temps below 20°F will have the crew inside most of the day.

We ordered our crew from the hatchery, and picked four ladies and gent to have a stable flock. There are four different varieties of runners in our crew, so it's easy to tell them apart at a glance. Keep in mind that the size of your flock should be matched to the size of your garden. Our crew of five does a good job covering over an acre of garden and orchards. For a small garden, a pair of ducks can get the job done without being lonely or getting into too much mischief. Don't get a single duck. They are social birds.

The video below shows the ducks on patrol, from their first visit to the garden as ducklings to adulthood. (If the video doesn't display, make sure adblockers are off.)

Most ducks are skittish. This helps keep them safe from predators, but makes them challenging to handle. Our crew gets petted and/or handled each night as part of their bedtime routine. They still don't like it very much, but it's been very useful when they need to be handled. Miss Blue, Miss Chocolate and Miss Emerald all required some extra care during the past couple years. We also talk to them and sing to them, so they know our voices.

Next up – following us around. Initially, we took them for short visits into the greenhouse and closed garden beds. Dunc and I weeded and talked with the duckies, and they'd stay by our sides and look for bugs. You might say we were surrogate mamma ducks.

As they grew, we took them out each morning to forage in the gardens while we gathered weeds for the chickens. This is when we introduced the whistle. We keep boards in the garden to mark paths – they also make a great spot for slugs to hide. We flip the boards over, and then whistle to get the ducks' attention. They run over and have a slug feast. Now they know when they hear the whistle, it's treat time.

Initially, they worked side by side with us in the garden, and then went back to their pen or the duck tractor. When they got a little older, they had free range time mornings and evenings. Now they free range all day long.

Just like when dealing with kids and other pets, consistency is key with duck training. We never give the whistle without a reward at the end. When working in the garden, the reward is the garden pests. If they're coming in at night or putting up with being petted, the reward is freeze dried meal worms sprinkled in their water basin. (We also spread a few around the greenhouse for them to hunt in winter.) They also enjoy chopped tomatoes.

In winter, they get some meal worms in their water in the morning and at bedtime. In summer, they only get their bedtime treat, as a reward for coming in and putting up with petting time. (Most mornings they run out the door immediately to forage, so the treats aren't missed.)

While they have access to ten acres and pond, they still spend a good amount of time working the gardens and orchards. More often than not, if we're working in the garden, we have duckies hunting bugs right by our side.

Tips for Working with Ducks in the Garden

Ducks don't dig up the garden like chickens, but there are a few things you need to keep in mind when you use duck pest control.

Ducks love leafy greens and some seedlings. Our crew's favorites are lettuce and Swiss chard, but the will happily nibble a variety of small greens. They also enjoyed sampling onion and pea seedlings, and baby brassicas. Once plants are larger and more established, a little nibbling won't hurt, but for small plants, it can wipe them out. I suggest keeping the ducks away from these plants (peas, onions, cabbage family vegetables) until the plants are at least half grown. With salad greens, it's probably best to keep a fence or other barrier between the duckies and the greens.

Not only will they happily eat your salad, duckies poop – frequently. It's best to avoid that near foods that are eaten raw. If you're nervous about having any duck poop directly in the garden, create a duck run around the garden. Slugs are attracted to duck poop. The ducks patrol the perimeter of the garden, and the slugs are drawn out of the garden towards the duck poop – where they are munched by the ducks. You’ll keep the ducks away from temptation, and avoid the risk of duck poo on your raw veggies. You won’t get the same level of pest control that you’d have with them directly in the garden, but it should still help.

Ducks love to twiddle. If your ground is muddy or you have standing water in the garden, ducks will revel in it. They love burrowing their bills into mud, and flushing water through their bills. This is great for clearing mosquito larvae and other pests, but it does make a mess.

We Love Our Duckies – But They're Not for Everyone

Our ducks have given us many hours of joy simply watching them, and done wonders for reducing the slug and bug populations. That said, they're not for everyone. In a tiny urban yard, their urge to play in the water and mud may make too much mess for the area. They can also be LOUD. Buff, like other drakes, talks in a quite, raspy quack. The ladies also engage in polite chatter, but sometimes they “let ‘er fly” with round after round of brassy, sassy quacks. Here, we don't have close neighbors, so it's not an issue. In a suburban or urban setting, it might be a problem.

Do you have more questions or comments about using ducks for pest control? Leave a note below and share your thoughts.

We'd love to invite you to have a look around the site. There are a number of articles on backyard poultry, all listed on the Common Sense Homesteading page, including: