/ Preparedness / The Best Cheap Flashlight (Under $5 each and Crazy Bright) 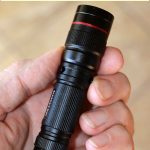 As part of our effort to be prepared for everyday emergencies, we went on a hunt for the best cheap flashlight. Our target was a durable, inexpensive high lumen flashlight that we could give out freely and not worry if it was lost. It needed to be a flashlight bright enough for a light source during power outages and lighting around the yard at night.

Our Pick for the Best Cheap Flashlight? The KOOTEK XPE-Q5 LED

Summary: We recommend the Kootek XPE-Q5 LED flashlight. It is a low cost, super bright LED light. It uses one AA battery or one 14500 battery which is not included. This zoomable, compact flashlight is water resistant (IPX6 compliant) but it is not waterproof. It is listed at 700 lumens but is more like 300 lumens. It is much brighter using a 14500 4.7v battery.

The case is aircraft grade aluminum with a belt clip and a manual focus. The flashlights are about 3.7 inches (90mm) long x 0.83 inches (20mm) wide and weighs about 2.1 ounces (without the battery). It has 3 light modes – bright, dim, and strobe. We suggest you buy one five pack and test them out, and get more later. This is our choice if you need cheap flashlights in bulk. A 5 pack is only about $4 each and they use the common AA battery and alternately the less common 14500.

Pros: Small, lightweight and powerful flashlight. It is the right price to leave them stashed around the house, in the car, tool boxes and emergency kits.

Cons: It gets hot if the unit is left on “high mode”. The flashlight doesn’t remember the last mode. It doesn’t have a seal ring. The adjustable focus goes from wide (where the LEDs are not visible) to a narrow beam of light (where the individual LEDs are visible). This is a pro and con as narrowing the focus increases the “throw” of the flashlight to at least 300ft (about 100 meters) but the visible LEDs may bother some people.

Put these cheap flashlights in bedrooms, kitchen drawers and tool kits. Also, put a budget flashlight in each emergency kit, 72 hour kit, first aid kit, get home kit and bug out bag. If you or the kids lose one, you aren’t losing an expensive flashlight. Remember to store the battery separate from the flashlight if you aren't using it regularly.

I recommend three flashlights for every vehicle. I was on the way home and came across a deer accident. In clearing the road, vehicles were not slowing down. I put one flashlight facing traffic in each direction with strobe on. The strobe slowed traffic down more than normal hazard lights.

The Kootek is about 200 lumens, so it is very bright with a fully charged AA and even brighter with a 14500 3.7 volt battery. The beam color or hue is a fairly clean white and varies toward blue (known as “cool white”). Given the variance in production each flashlight might have slightly different color hues. You can see all the individual LEDs when it is not diffuse, as noted in the CONS above.

The Kootek flashlight has a decent range (throw) of about 300ft (100 meters) fully focused. Although the LEDs are visible in the narrow focus, the brightness is just right for close tasks like pulling a sliver. It is not a functional spotlight but will light up a room well, or provide enough light to pull a sliver.

The wide focus works better for a night-time tire change or lighting up a room. The strobe is disturbingly bright and is a good alternate to a road flare. The lower intensity is good for enough light to see your way around the house in the dark.

When we first ordered a 5 pack of the Kootek, we wondered if such a cheap flashlight would be any good. When we got it we were pleasantly surprised. The case feels solid. The three modes are toggled using the thumb button (tail cap) on the back.

Some advertisements say that they are 700 lumens (brightness). In testing it is actually about 200 to 400 lumens (depending on the AA vs 14500 and focus). The smaller barrel of the light is not the standard size for a tactical mount.

We have purchased over 20 of these so far. Everyone who received them as gifts liked them. The brightness is just right for close tasks like pulling a sliver. They're scattered around in the cars, kitchen, bathrooms, bedrooms and utility area.

Previous winner was the 7w Q5 Mini Cree 300lumen LED. Our favorite version of the Cree LED Q5 was the Ultrafire. That unit is also inexpensive, but dim compared to the Kootek.

The video below shows a comparison of the Cree and the Kootek. (If video doesn't load, make sure adblockers are turned off.)

See also: “Electromagnetic Pulse (EMP) – What You Need to Know” for info to protect your LED flashlights from EMPs.

You may also find other posts on General Preparedness, First Aid and Food Storage useful, including: