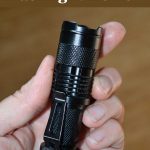 In this Cree 7w flashlight review we cover a few different variants of the Cree Q5 300 lumen LED flashlight. We have purchased over 100 of these Cree LED flashlights, so this post is written from experience. (I give small flashlights as practical gifts, as noted below.)

The Ultrafire 7w 300lm Mini Cree was and still is the quality leader. If you still want them, we recommend the 6pack Q5 mini Cree 3 mode LED flashlight as they are less expensive. These are affordable flashlights that use a single standard AA or 14500 3.6v battery. The 300 to 500 lumens listed (depending on the model) is more like 100 lumens. The case is sturdy aluminum with a belt clip and a manual focus. The 14500 battery will make the flashlight brighter assuming it is a true XR-E “Q5”. Before you buy a lot of these, we suggest you buy one 6 pack of these and one 5 pack of the Kootek XPE Q5 flashlights. The XPE are better in nearly all categories.

The flashlights are about 25mm (just under an inch) wide and 92mm (3.6 inches) long, weighing about .143 pounds/65 grams/2.3oz. These flashlights tend to cost much more individually, which is why we recommend you purchase multi-packs.

It is bright, inexpensive and reasonably durable. The casing is water resistant (but not waterproof) aluminum alloy and has no IPX rating. Battery life is good. With LED tech, batteries last a long time compared to the old flashlight models I used as a kid.

A remote pressure switch is available for weapon mounts (but we don't recommend it for that use). Note the unit in one of the pictures is the Ultrafire, but is the same “build”. This is was the best flashlight for the money but now the XPE based AA flashlights are our recommendation.

The Cree Ultrafire Q5 7w LED is heavy for an EDC (Every Day Carry) flashlight in a purse or pocket. If the unit is left on “high mode” it gets hot. Out of the 100+ we ordered about 3% were bad out of the box or failed soon thereafter, and given the return processes we just used them for parts or tossed them. The ones we bought had the water gasket, but they did not have an IPX rating (water resistance rating). The individual LEDs are visible as a series of rectangles when it is fully focused, which may bother some people. As noted, quality and lumens vary, especially with the constant changes in brands.

Stashed in a car or truck, one in the glove compartment and two in the trunk/toolkit. These are good for nightstands, bathroom and kitchen drawers. Put one in an emergency kit, 72 kit, first aid kit, get home kit and a bug out bag. If you or the kids lose one you aren’t losing an expensive flashlight.

We recommend three 3 mode LED flashlights for every vehicle for regular and emergency use. I was on the way home and came across a deer accident. In clearing the road, vehicles were not slowing down. I put one flashlight facing traffic in each direction with strobe on, which did slow down traffic more than normal hazard lights.

When we first ordered this cheap flashlight we were suspicious that a $3 flashlight could be any good. (Note they are now closer to $5.)  It took a couple of weeks to arrive from China. When we got it we were pleasantly surprised. The case feels a bit overbuilt and industrial. The three modes are toggled using the large orange thumb button (tail cap) on the back. The flashlight doesn’t remember the last mode.

The advertisements say that they are 300 or 400 lumens (brightness). In testing the mini Q5 Cree flashlight is actually about 80 to 100 lumens (depending on the model and focus) – there are numerous name brands such as Ultrafire, Thorfire, Trusfire and Sipik – all of which appear to be the same flashlight.

Note: The lumen rating is over-estimated on nearly all Q5, C8 and T6 flashlights. Only the more expensive name brands have reliable lumen info.

We have purchased over 100 of these. I gave them as parting gifts to my team at my previous employer, and we have given them as Christmas presents. Out of the 100+ we have had a few duds, but given the price and general quality for the ones that work it is a great deal, and they won't break the bank if you lose them.

Even though the mini Q5 Cree flashlight is about 80 to 100 lumens, it is still a very bright light with a fully charged AA.

The light color or hue is not too “red or blue”. It is a fairly clean white and varies toward blue (known as “cool white”), however, given the wide variance in production each one might have different color hues. With a 14500 battery they are slightly brighter but we have standardized on rechargeable AA batteries (but we do have a couple 14500s for testing).

The Q5 Cree flashlight has a decent range (throw) of about 30 feet to 75+ feet, depending on flood vs. narrow focus beam. Although the LEDs are visible in the narrow focus, the brightness is just right for close tasks like pulling a sliver. The wide focus works better for a night-time tire change or lighting up a room. The strobe is bright and is a good alternate to a road flare. The lower intensity is good for enough light to see your way around the house in the dark.

Watch Out for “Off Brands”

Be cautious buying the off brand / unnamed Q5 flashlights – there are many. They are similar and some are slightly less expensive, however, not all of them use the Q5 LED and even with the Q5 many only have on/off, not 3 modes.

The single mode Q5 flashlight should be about $1 to $2 cheaper than the three mode unit. There are some “waterproof” versions that include an o-ring seal. We recommend the Kootek but if you really want these, you should only order one or single pack, and then order more if the quality is acceptable. We ended up with a few single mode no-name flashlights when we intended to get 3 mode, so confirm the seller has a good rating and you are actually purchasing the Cree Q5 LED flashlight.

Our readers report using the flashlight over four years and they are still working well. Some readers report inconsistent lumen and quality in the mini Q5 Cree 7w flashlights. The linked flashlight we selected remains fairly well rated. (Here is a link to the original Ultrafire, but it is more expensive).

We have heard of people having trouble with the switch, and units being bad to start. We have also had complaints of bait and switch with advertising listing the three mode and delivering single mode instead. Also lower lumen than even the 100 lumen.

The Cree Q5 LED flashlight is a small, inexpensive, single AA battery, LED flashlight with an adjustable focus. It's a functional option for hunting, cycling, climbing and camping, but the newer models such as the Kootek will throw more light. See our full review of the Kootek in the Best Cheap Flashlight post.

The video below shows a comparison of the Cree Q5 and the Kootek. (If the video doesn't load, make sure adblockers are turned off.)

Watch out for false ratings. Some “high ratings” on amazon are due to lots of short reviews. Many in a short time period with grammatical errors (to me that indicates they are fake reviews). Also watch out for high shipping costs. (Some sellers price an item low and overcharge on shipping.)