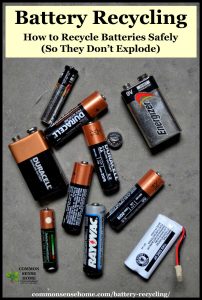 Whether you are using a flashlight, cordless power tools or cellphone, battery powered tech makes life easier. But what happens to batteries when they reach the end of their lives? We’ll explain safe battery recycling – where, how, and why you should. This is extremely important, because some batteries can explode or catch fire if handled improperly.

The Problems with Throwing Batteries in the Regular Trash

When batteries end up in a landfill, the toxic materials in them can leach into soil or nearby water sources. Accidental or improper incineration of batteries can also release toxic fumes into the air.

“A landfill is a living organism,” said Ed Green, senior vice president of Retriev Technologies, Inc. Retriev Technologies is a battery recycling center based in Lancaster, Ohio, and leader in the battery recycling industry. “A study performed on landfills [in the late 1980s] showed that batteries make less than half a percent of landfills, but 86 percent of mercury and 56 percent cadmium contamination is coming from household batteries.”

Depending on the chemistry of the battery, incorrect disposal can even be dangerous. Improperly discarded lithium and lithium-ion batteries, for example, can combust.

“Putting rechargeable and especially lithium batteries in the garbage is an insanely bad idea,”  said Lynn Rubinstein, executive director of the Northeast Recycling Council, Inc. “They’re very, very volatile  Entire recycling facilities have burned down because of one lithium battery.”

Recycling batteries keeps potentially toxic products out of landfills. The batteries can also be broken down into their components and the materials can be reused to make new products.

The laws for recycling or disposing of batteries will vary depending on where you live. In California and Vermont, for example, it is illegal to put batteries in the garbage.

“This is almost always a local question,” Rubinstein said. “In many towns, it is the department of public works that will have recharge and recycling. In some towns it’s the board of health. Look on your community website to sort your way to the person to ask.”

Where do I dispose of used batteries?

To find a recycling option near you, first check with your local municipality. If you have trash and/or recycling pickup, it may include guidelines for battery disposal.

If you can’t find local information, check out Call2Recyle. Call2Recycle is a federal recycling program that has battery collection centers all over the country. You can search for a battery recycling location near you using the Call2Recycle website.

Many national hardware and big box stores have battery recycling programs. Home Depot and Lowes, for example, partner with Call2Recycle to provide drop off locations around the country.

If you do not have a convenient drop off location by you, you can still mail your used batteries to a service to be recycled instead of throwing them in the trash. Retriev Technologies, Inc.’s Big Green Box program allows businesses and households to collect and mail back all sorts of batteries for sorting and recycling at their facilities.

There is a Little Green Box that is smaller and more affordable for individual households. They even collect and recycle alkaline batteries, which are not recycled at many facilities due to cost.

“You’ve got to make it simple to recycle,” Green said. “It’s the environmentally friendly thing to do.”

How do I properly dispose of batteries?

For most recycling centers, simply put your batteries in a plastic bag, which will keep any caustic battery materials from leaking, and leave them at the drop-off point. The facilities that recycle the batteries will sort them properly.

For some batteries, you will need to cover the terminals with clear tape to insulate them while still being able to see battery information.

“Certain batteries require the terminals to be insulated because they can generate heat that could create a fire,” Green said. “Scotch tape or packing tape over the terminals is a simple way of doing it.”

Green said to insulate alkaline batteries, nickel cadmium batteries and nickel metal hydride batteries only if they are greater than 9 volts. All other battery chemistries other than those three need to be insulated regardless of voltage.

With batteries that are small or tricky to remove — like button cells, for example — Rubinstein suggested chucking the whole device instead of going through the hassle and hazard.

“If you find yourself struggling with it, stop struggling,” Rubinstein said. “If you don’t need the device anymore, put it in the Call2Recycle box.”

This is especially true of batteries in cellphones and laptops, which you should not attempt to remove for your own safety.

“Do not try to take the battery out of your cellphone or your laptop,” Rubinstein said. “The way that the batteries are installed and what they are made out of they can very easily burst into flame. If you try to pull them off they rip.”

Rubinstein said that Call2Recycle and many other recycling programs will accept whole cell phones, laptops and other electronics for recycling in such instances.

If your batteries are leaking, bulging or have a metallic crust on the outside, they may be corroded.

Rubinstein said that it’s safe to dispose of corroded alkaline batteries in the trash in a plastic bag, but treat corroded lithium batteries with great care.

“A corroded lithium battery is highly dangerous,” Rubinstein said. “Don’t drop it into a box. Put it in ziploc bag, put in a bunch of clean kitty litter, put that in a plastic [container] and get it to hazardous waste program. Don’t keep it in your house, and don’t put it in your garage.”

For more information on environmentally friendly products and practices, see the Green Home page. The Light and Power section of the Preparedness page features several posts on batteries and emergency power, including:

Previous Post: « Electromagnetic Pulse (EMP) – What You Need to Know
Next Post: Stinging Nettle – One of Most Useful Wild Plants »