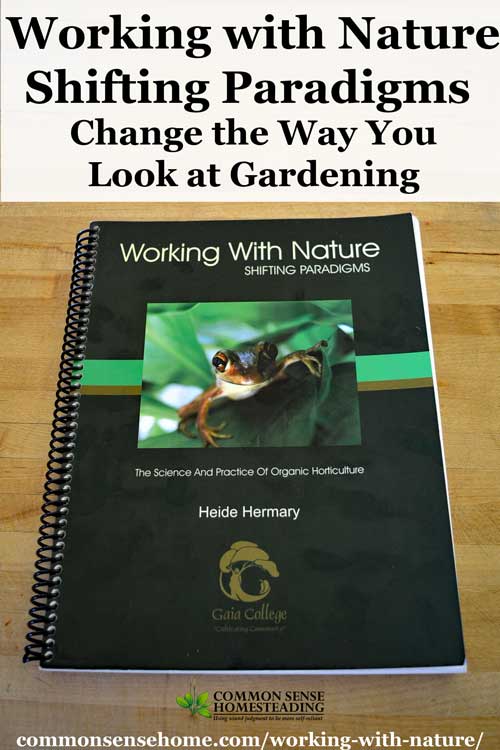 Working with Nature – Shifting Paradigms:  The Science and Practice of Organic Horticulture was one of those books that had me jumping up and saying to my husband and boys, “Look at this!”  The author, Heide Hermary, opened my gardening world to a whole new range of ideas and possibilities.

How is Working with Nature – Shifting Paradigms Organized?

Working with Nature – Shifting Paradigms is divided into eight chapters:

In her introduction, Heide outlines some of the problems with the status quo, including:

She suggest that we start asking new questions instead of simply attempting to fund new solutions for the old questions. If we care for the land, the land will provide for us. It’s a win/win.

The book contains over 200 pages densely packed with information, plus a bulging reference list for further investigation (there’s literally a lifetime of investigation waiting for you here). I’d like to share some of the ideas that caught my attention.

Trade Alliances Between Plants and Microbes

In chapter 1, Heide discusses Trade Alliances, that is, alliances between organisms that benefit both parties involved. Most of us are familiar with the pollinator/plant relationship, but I think many of us are unfamiliar with microbe and soil allies. She shares that all plant leaf surfaces are “naturally colonized by a great diversity of microbes that feed on the metabolic wastes excreted by plants”. These microbes, in return, protect the plant from diseases, insects and possibly airborne pollution. Inoculating a plant with compost tea has been shown to protect a plant from aggressive plant damaging fungi. Have issues with downy mildew or blight? Compost tea and Effective Microorganisms may be your answer.

The Role of Myocorrhizal Fungi

Have you ever heard of mycorrhizal fungi? Oddly enough, I first saw the term “mycorrhiza” years ago in a fantasy novel – “The Dragonriders of Pern”. In that series, they adapted naturally occurring plant protectors found in the soil to protect and heal plants from an extra-terrestrial attack. 🙂  In our world, mycorrhizal fungi colonize plant roots. They then send out hyphae (branching filaments) into the soil (potentially miles of filaments) to gather nutrients from the soil that the plants have difficulty obtaining on their own. They trade these nutrients to the plants for carbohydrates. Pretty cool, huh? These fungi also acts to protect the plant roots. They repel bacteria that would consume the roots. In fact, soil dwelling fungi have been used to develop commercial antibiotics.

Basically, there is an entire ecosystem in miniature associated with every single plant. The healthier and more robust this ecosystem is, the more likely your plants are to thrive. Any time you disrupt this ecosystem – via tilling, applying chemicals (even fertilizers – many synthetic fertilizers are toxic to microbes) or introducing GMOs – you damage this ecosystem. Conversely, with the reintroduction of helpful microorganisms (such as the application of compost tea), badly damaged “worn out” soil can be healed.

Another intriguing concept addressed in the book was biological transmutation. Heide describes how living organisms (animals, plant and microbes) can transform certain isotopes of some elements into specific isotopes of other elements. (Yes, some animals, plants and microbes have mastered alchemy.)  This is relevant to gardening because it appears that within an ecosystem, certain plants don’t simply grown well together as companions, they do so by providing for the needs of the system by transmuting the very elements available in the soil.

I know this sounds pretty bizarre, but an example she gave was how calcium rich dandelions show up in calcium depleted lawns. I have always read that the dandelions have deep tap roots, which allows them to mine these minerals from deeper in the soil. (Heide notes the same thing.)  However, in her horticultural experience, she has found that dandelions have roots that are not much deeper than grass roots. She asks the question, “Are dandelions depriving the grass of calcium, or are they producing (transmuting it) it?”  She continues to state, “It looks like our war on unwanted plants, insets and microbes is costing us money twice; once to kill the organisms, and again to apply the nutrients that are now no longer provided by the ecosystem.”

Feed the Soil, Feed the Plants

I could go on and on – from debunking the myth that blueberries need acidic soil (they really just need the nutrients that are often available in such soils – pg 146), to pointing out the problems with drip irrigation (how can you have a healthy, diverse ecosystem in a soil that’s starved for water? pg 82) to working with energy in the garden (chapter 7 – somewhat “out there” for many, but if you read it a lot of it just makes sense) – this book is a wealth of information. It’s like no other gardening book I have ever read. 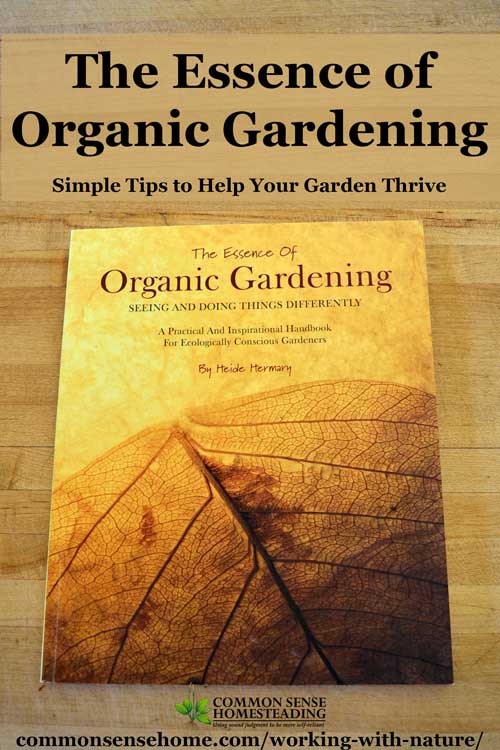 The Essence of Organic Gardening:  Seeing and Doing Things Differently

Along with Working with Nature – Shifting Paradigms, Heide has also written a book titled The Essence of Organic Gardening:  Seeing and Doing Things Differently. This 43 page book is a great introduction to organic gardening, explaining to the reader the basics of what defines a healthy garden, and simple tips for making your garden thrive.

This book would be a wonderfully quick and easy read for those new to gardening, or those who have been gardening for a while using mainstream gardening tactics. We shouldn’t be fighting nature, we should be working with nature.

In many ways, we have acted like curious toddlers, wandering into our environment and making changes with having any true understanding of the long term and widespread effects of our efforts. These books are part of a slowly growing movement to work with the earth instead of simply bending it to our will. It is long overdue, and I believe we will all be the better for it.

In Remembrance of Heide Hermary 1948-2016. Heide was president of Gaia College in British Columbia, Canada until her passing in 2016. Gaia college offers a variety of classroom and online programs. Heide held a Masters Degree in Sustainable Agriculture and a Diploma in Landscape Design, Maintenance and Installation. In 2007 she received the Educator of the Year Award from the B.C. Landscape and Nursery Association. She was also the co-founder of the Society for Organic Urban Land Care.

More Gardening Posts You May Enjoy:

Previous Post: « How to Make Seasoned Croutons
Next Post: How Much Energy Will a Solar Electric System Produce? »