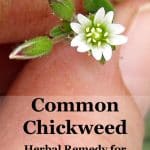 Welcome to the Weekly Weeder, where we learn how to use common weeds from our yards and gardens. Today's featured weed is common chickweed, Stellaria media.

There are over 100 related species in the Stellaria genus, so odds are that common chickweed or a relative are somewhere near you.

I became acquainted with chickweed in the summer of 2010. Huge swaths of German chamomile were growing in my garden where it had reseeded from previous years. Mixed in with the chamomile were plants with small white flowers that were similar in size.

I took a big box of chamomile with me to the farmer's market to process and load into my dehydrator between customers. (Our little market was pretty slow, and the boys were helping man the table).

When I showed the mystery flower to the other market vendors, not one person could identify it. “It's just another weed” was the main response. (Disappointing!)

I finally recognized the plant as I was reading through Healing Wise. Susun's fanciful description of “the little star lady of the fields who spreads her stars at your feet” gave me an “Ah hah!” moment. The flowers really do look like a field of stars on a green background.

Range and Identification of Common Chickweed

Where Does Common Chickweed Grow?

As you can see from the USDA range map, common chickweed is very widespread. It grows nearly everywhere around the world.

Common chickweed tolerates sun or shade, wet or dry conditions, and pops up in disturbed soil such as gardens and lawns. I find it in and around my garden.

Chickweed prefers rich, fertile soil. Excess fertility may encourage its growth (see below). It prefers cooler temps to scorching sun, and is a winter weed in warm climate areas.

In the book “Weeds, Control Without Poisons“, the author notes that chickweed often thrives on excess organic matter.

Specifically, “It is frequently the case of too much grass clippings not being consumed, a lot of pet or manure on a garden, with acids coming off organic matter flushing out minerals that become a little too hot for grass or vegetables. This situation is an invitation for chickweed to set up shop.”

This would explain the flush of chickweed growth at the end of friends' lawns where grass clippings stacked up against taller field grass.

Common chickweed can be best identified by its small white flowers, which have five petals that are so deeply divided that they appear to be ten. The leave type is simple, the leaf attachment is opposite.

The whole plant is a bit hairy, but not bristly. (You won't be poked like you would by a thistle.) Stems are juicy.

It grows in low, ground hugging mats, and starts out quite small but spreads fairly rapidly. It's an annual in cool regions, but may act as a tender perennial in warmer areas.

In the absence of such visitors, the flowers of Common Chickweed can self-pollinate. Some insects feed on the foliage and other parts of Common Chickweed. These species include both the adults and larvae of Cassida flaveola (Pale Tortoise Beetle) and the larvae of such moths as Agrotis venerabilis (Venerable Dart), Haematopis grataria (Chickweed Geometer), and Lobocleta ossularia(Drab Brown Wave); see Clark et al. (2004) and Covell (1984/2005).

Vertebrate animals also feed on Common Chickweed and other Stellaria spp. The seeds of such plants are eaten by the Mourning Dove, Chipping Sparrow, House Sparrow, White-crowned Sparrow and Field Sparrow; the Ruffed Grouse also browses on the leaves. The Bird Table displays a more complete list of these seed-eating birds.

The foliage, flowers, and seeds are a minor source for various mammals, including the Cottontail Rabbit, Groundhog, and White-tailed Deer (Martin et al, 1951/1961).

The seeds are able to pass through the digestive tracts of White-tailed Deer and remain viable, spreading Common Chickweed to new areas (Myers et al, 2004). Other herbivorous mammals probably spread the seeds in their feces as well. The Prairie Deer Mouse eats the seeds of Common Chickweed to a minor extent (Houtcooper, 1978).

Chickweed is edible, and fairly tasty. I include it in my salad mixes when I'm out harvesting greens in the garden.

The flavor is mild – even the stems aren't too chewy. Use it fresh and raw. It doesn't stand up well to cooking.

Susun Weed suggests, “Use chickweed like parsley: as a bland but salty, herby garnish.”

She also notes, “Chickweed is bio-available optimum nutrition replete with minerals, proteins, carotenes and vital life energy. Chickweed, the little star lady, thins the cellular membranes so nutrients are absorbed and utilized to their maximum.”

Common Chickweed can be tinctured, dried, and made into poultices. Susun sings heavy praises of the power of chickweed. Healing Wise states:

The little star lady chickweed is a powerful nourisher to the glandular and lymphatic systems. Poultices externally, as needed, and twice daily doses of 40 drops of fresh tincture are used with other Wise Woman ways for those with thyroid irregularities, reproductive cysts, ovarian cancers, and testicular troubles such as cancers, swelling, burning, or itching.

She also recommends it for digestive issues, internal organ health, wound healing, weight loss, joint pain relief, and eye healing. You can use a chickweed poultice to heal conjunctivitis (pink eye), without the side effects of prescription drugs.

You can make a soothing chickweed bath by gathering a few handfuls of fresh chickweed and bundling it in a piece of fabric (or an old sock) and hanging it under the running water as you fill your bath.

or *Cook the greens and stalks, especially when using older plants or treating deeply; cool somewhat before applying.

or *Simmer chickweed in half water, half vinegar for about five minutes, cool and apply.

Then cover chickweed with a cotton towel or a thin layer of clay, and poultice for five minutes to three hours. Replace when poultice feels hot to the touch and oozes. (Yes, hot! Though most poultices are applied warm and removed when they cool, chickweed poultices actually heat up as they draw out infection and heat.)

Relief often begins within a few hours of the initial application, with pain and swelling diminishing steadily as treatments continue.

Combine all ingredients in a clean dispenser-top bottle. Shake well.

To use: Wet a cloth or cotton ball with lotion and apply to closed eyes for 3 minutes. Discontinue if eyes are sensitive.

How to Get Rid of Chickweed

Sometimes you can have too much of a good thing. I've seen more than one reader complain that chickweed likes to take over their garden.

Chickweed is shallow rooted, so although it may look like a green carpet, it's easy to remove.

If it has not yet flowered, The Gardener's Weed Book recommends tilling it under as green manure (once it flowers, this is not generally recommended, as the plant will continue to mature and set seed even after it has been pulled from the soil).

If you need to pull it out, Barbara recommends winding it up like spaghetti on a tined garden tool such as a rake or pronged hand spade.

I usually just pull it if it gets too invasive, but overall it's pretty well behaved and I'm happy to have it around to eat and to brighten up the garden.

You may also enjoy other posts in the Weekly Weeder Series and Herbs and Wildcrafting, including:

For more in depth plant studies, consider The Herbal Academy. They offer learn at your own pace research tools through The Herbarium, along with more structured options through online courses from beginner to advanced.