This post explains what the plague is, identifies global plague “hotspots” and how you can get the plague. It also details three types of plague and symptoms of each type. We also discuss how to reduce your chances of getting the plague, protecting your pets and modern and historical plague remedies.

What is the plague?

The plague or “Black Death” or “Black Plague” ravaged Europe from roughly 1347 to 1351 and into the 1700's, and is still around today. What caused the black plague? Most likely the black plague was caused by Yersinia pestis bacteria. The Yersinia pestis bacterium affects mammals and humans and is carried primarily by fleas. What was the black plague exactly? It was most likely one or more of the three different types of plague (see below). Modern antibiotics, in most cases, can cure the plague if caught early.

Although the plague is very dangerous, thankfully the risk of infection is low.

The World Health Organization reports that from 2010 to 2015 there were 3248 total cases worldwide, including 584 deaths.

The Democratic Republic of the Congo, Madagascar, and Peru have the highest number of plague cases between 2010-2015. In the USA, the most outbreaks have occurred in the southwest in California, Colorado, New Mexico, and Arizona.

How could I get the plague?

People associate the plague with rats. However, the fleas on the rats are the problem. Your 4 main sources are:

A lab test of a sample of pus from a bubo (a swollen, inflamed lymph node in the armpit or groin), blood or sputum is needed to confirm diagnosis of plague, and what type it is.

There are three main types of plague: Bubonic, Septicemic and Pneumonic. Pneumonic is most dangerous, as it can be passed person to person. The following information is sourced from, and attributed to, the WHO (World Health Organization) and CDC (Centers for Disease Control)

How to survive a plague?

If you or a loved one develops symptoms of any form of plague, seek professional health care immediately. Plague can be successfully treated with antibiotics, but an infected person must be treated promptly to avoid serious complications or death. Early diagnosis and early treatment can save lives. If you suspect anyone is infected, wear a mask and gloves.

Reducing your chance of getting the plague

Watch the news for outbreak information. Follow instructions from health professionals and officials. Watch for reports of large numbers of rodents dying. Historically, plague spreads in an area after large numbers of susceptible rodents died. The fleas pass the disease from the dead animals to other mammals and humans. In southwestern U.S. it is more likely to occur during cooler summers that follow wet winters.

More ways to protect yourself from the plague

Protecting your pets will protect you and your family.

Historical Herbal Cures for The Plague

Numerous methods were used to try to protect from plague. This information is provided as historical reference only, and is not intended to diagnose or treat any illness. Anything strong enough to use as medicine may have side effects, including herbs. Consult your medical professional before using herbal remedies especially if you are nursing, pregnant or on prescription medication.

Garlic has been used medicinally around the world for tens of thousands of years. During outbreaks, gravediggers drank wine containing crushed garlic and ate large quantities of fresh crushed garlic to ward off the plague. Even though garlic does not provide magical protection, the disease-fighting power of garlic has been repeatedly tested true in thousands of studies.

Margosa a native to India, has anti-viral, anti-septic, and anti-bacterial properties. A common use includes using the leaves and branches in bath water for patients suffering from chicken pox symptoms.

Thieves Vinegar was used and consumed regularly to purportedly protect from plague. There are many variations of thieves vinegar. Common ingredients include: garlic, lavender, rosemary, thyme, yarrow and sage. Learn how to make Thieves Vinegar here.

Facts About the Plague

Posts you may find useful:

This post was written by August Neverman IV. August is the Chief Information Officer and Information Security Officer of Brown County. August served on several emergency preparedness teams during his tenure at a local hospital. He also received emergency response training while serving in the Air National Guard. He and his wife, Laurie, live with their two sons in a Green Built, Energy Star certified home with a permaculture twist.

LuminAID solar powered lights are unique, lightweight, durable, IP68 waterproof, inflatable lights. Ever since I saw them on Shark Tank back in 2015, I thought the company was on to a good idea. We review the cube-shaped Packlite Nova and Packlite Titan.

Clean water is important, and Big Berkey water purification system provides a simple, reliable way to filter water. They are gravity fed, so you don’t need power, making them suitable for everyday use or emergencies. In our Big Berkey review, we discuss how the water filtration system works, answers to common questions, and alternative filters.

Honey is an amazing substance that is both food and medicine. If you store raw honey correctly, it lasts forever, or at least close to it. (Edible honey thousands of years old was found in Egyptian tombs.) We share tips for honey storage, and answers to common questions about honey.

It’s winter, and you always *planned* to get supplies if the power went out. Now it’s below zero and the power just failed. What do you do for emergency heat during a power outage? This post contains ideas for winter storm survival while sheltering in your home, but many of the ideas could be adapted… 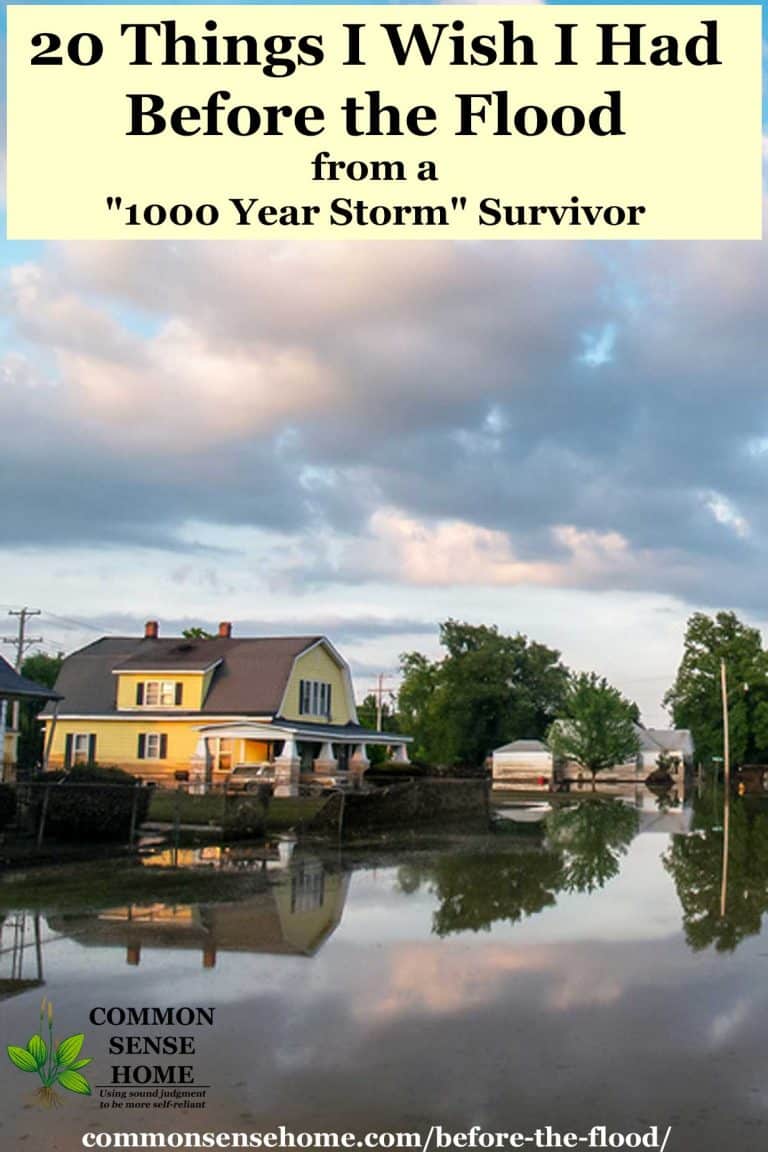 Flooding from heavy rains and coastal flooding due to storm surges combined with heavy rains have been a common occurrence in recent years. In this post, I’ll share my flood experience, focusing on the flood preparedness items I didn’t realize I needed – until the storms hit. We also talk about dealing with floodwater contamination…

In recent years, many areas of the country have been hit with some heavy snow and ice storms – sometimes unexpectedly. We’ll share a winter vehicle maintenance checklist and winter car kit checklist to help you prepare for cold weather travel. For help with winter weather starts, check out “Car Won’t Start in the Cold?…