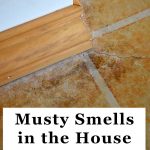 If you have musty smells in the house or basement and want to get rid of them, the first thing you need to do is ask some questions. If my house is musty, do I have mold? Does my house get musty in summer? Does my house smell musty only when it rains, or only after I've been on vacation?

Note – I'm not a fan of air fresheners. We want to eliminate musty smells, not just cover them up.

Is it Moldy or Musty?

Houses old and new have issues with mold and mildew. Older houses develop leaks over time, letting moisture in where it shouldn't be. New houses are built so tight they trap too much moisture inside.

As a homeowner or renter, you need to be mindful of indoor air quality. If you feel congested or have watering eyes at home, but feel better when you're away, that's a red flag.

So what's the difference between mold and mildew? They're both fungi, and both like damp conditions. Both have a funky, musty odor, but mold tends to be stinkier.

Mildew is usually powdery or downy (think powdery mildew on plants). It forms a thin layer on the surface.

For instance, we have a litter box for the cats down in the basement. The box is plastic, so it doesn't allow the floor to breathe where the two make contact. We get mildew under the litter box. It's easy to clean up, but something I know I need to watch.

The same thing will happen with plastic storage buckets. (See Preparedness Storage for more bulk storage information.) We tried keeping an area rug in the basement for a time, but found it was prone to cause mildew under the rug.

Mold is usually thicker, and can penetrate into materials. If a mold infestation is bad enough, it can cause structural damage. Black molds are commonly associated with health problems and may require professional mold remediation.

Sometimes a home or basement is musty from other sources. Pet odors, VOCs and other chemicals from carpets, furniture or other items may also contribute to a stuffy, musty house.

My House Smells Musty in Summer

In the summer, humidity levels are often higher. (Cold winter air can't hold as much moisture, plus we add heat, which dries air even more.) These higher humidity levels feed the growth of mold and mildew. (Warmer temps encourage their growth, too.)

You may notice more of a musty smell in the basement as warm, humid air condenses on cool basement surfaces – feeding mildew growth.

If you go on vacation and come back to a musty house, odds are it's just a bit of mildew or stale bits. Open windows or kick on filters or fans to get air moving and disperse the stale smell.

My House Smells Musty After Rain

Moisture feeds mold and mildew growth. If your house smells musty after a rain, and it's a significant difference, rain is probably going where it shouldn't. The first spots to check are the roof and attic, but rain can seep into basements and crawlspaces, too.

Common Sources of Musty Smells in Homes and Basements

Water Leaks – Outside Seeping In

Check for roof leaks, especially around any roof penetrations like chimneys. Inspect basement walls for seepage. Check all exterior walls for signs of water damage.

Even if drain hoses aren't leaking, over time outlet houses get buildup inside. This may have a musty odor. They may also trap and hold water, which grows all manner of “ick”.

Many front load washers retain a little water at the base of the unit. Over time, this water grows bacteria, leading to musty smells in your laundry area. We had problems with this in our first front loader. The new unit has a small drain hose, and I clear the stale water out every couple weeks.

An improperly installed drain hose may trap water in the line or allow sewer gases to escape into the home. (This can also lead to a frozen drain line.) Make sure drain lines are installed correctly.

Windows can be a problem in a couple of different ways. First, a cold window in a warm room is a magnet for condensation, which can lead to mold or mildew growth on the inside of the window. Second, if not probably installed, water can leak inside the window flashing and get inside the walls of the house.

Borax is a fungicide and mold inhibitor. It's also inexpensive.

Mix a solution of:

You can mix this in a bucket or use a spray bottle.

Mold and mildew love to grow in those sweaty nooks and crannies of refrigerator and freezer door gaskets. Clean drip pans regularly – especially if you'd had any spills in the refrigerator. See Best Odor Eliminators for Refrigerators for more detailed fridge care.

The right plants improve indoor air quality, but plants can also be a source of musty odors. Make  sure you don't overwater plants, and allow plants to dry between waterings. Remove dead leaves and debris from your indoor plants and compost them. Give plant leaves and soil a spritz of microbial inoculant or compost tea to seed the surfaces with good bacteria and crowd out plant mildew.

Not surprisingly, garbage can make your home smell musty. We have weekly trash pickup, even though we're in the country, but smelly items can get pretty ripe in six days.

I try to get garbage dry before it goes in the waste basket. If there are meat scraps (and they don't end up as chicken treats), I keep them in a sealed baggie in the freezer until trash day.

If the trash can itself picks up a musty odor, I treat with a surface odor remover.

Often when food and beverage containers go into the recycling bin, there's a bit of residual food stuck in the container. If it dries up or the recycling goes on its way, not a problem. If it hangs out in your house too long, that's going to stink.

The same goes for baby bottles that roll under the couch, or glasses with a dab of milk left in the bottom. Like to eat on the couch instead of by the table? Over time, all those food crumbs build up, adding to the “unique aroma” of your home. Old food spoils, and it smells musty or foul.

I can't walk down the bread aisle in the grocery store without smelling the faint aroma of years of stale bread crumbs. (Which is why I always bake my own bread.)

Sometimes items that got wet in the past can still harbor mold and mildew. If you've had flooding or other water damage, make sure to check everything that was affected. Carpeting is one of the worst offenders, but mold growth can hide in books, furniture, walls and more.

See “Best Odor Eliminators for the Refrigerator, Freezer and Carpets and More” for tips on dealing with musty carpets.

I think most of us have walked into a home where all you can smell are the pets. When you share your home with beasties, regular cleaning is a must.

Try to use washable pet bedding or bedding covers so you can simply throw them in the laundry from time to time. Use throws over sofas and chairs for easy washing. Vacuum frequently.

Consider an air purifier for the room where your pet(s) hang out the most, to pull pet dander out of the air.

Getting Rid of Musty Smells in the House and Basement

Once you've identified the source of the musty odor, it's time to get rid of it. For spot sources like plants, garbage cans and laundry, clean them up. If you find exterior leaks, get them repaired, and clean/remove/replace water damaged materials.

Moisture is the root cause of most musty house smells. If you have musty odors in the kitchen, laundry room or bathrooms, improve ventilation. We use ventilation fans with timers in the bathrooms. Switch it on when a shower starts, and it shuts off automatically.

If at all possible, stove vents should vent outside, not simply circulate air through a filter.

If you have a finished basement, add ceiling fans – and use them. Moving air helps prevent condensation.

Consider an air cleaner such as the Enviroklenz Mobile. We received one to test this winter after dealing with a moldy batch of firewood, and it's made a huge difference in the basement air quality.

Before we got it, the mildew/moldy stuck around long after the wood was burned. Once the unit fired up, it de-stinkified the room in short order. It sounds about the same as a food dehydrator – not terribly noisy.

Use this link to get an Enviroklenz Mobile unit plus 3 replacement filters – https://enviroklenz.com/common-sense-home-promo/

For musty smells in the basement – add a dehumidifier. We recommend the Vremi Energy Star dehumidifier. It has a hose connector so you can run it continuously if you put it near a floor drain. There are both 1500 and 4500 square foot models.

Be aware, a dehumidifier will use a lot of electricity, so you will notice it on your electric bill.

If you suspect mold but aren't sure, get a mold test kit. (This one includes three samples and a professional consultation.) If you're dealing with leaks or flooding, you have about 48 hours to get everything dry before mold starts growing.

If you smell mold or mildew but can't find a source, call in the pros. Many companies now offer both mold testing and remediation. This is serious stuff, so please be careful. I've had several friends driven from their homes due to mold contamination and associated health problems.

Clean Your Home, Clear Your Mind

As you're hunting for musty smells, it's a good time to clear out clutter. Open spaces promote better air flow. Those cluttered, forgotten corners are prime turf for dust and mildew buildup.

If you need some ideas to help you get started, check out Spring Cleaning – 6 Steps to a Clean and Organized Kitchen. 6 Ways to Get the Musty Smell Out of Clothes and Towels includes tips for dealing with musty closets.

Several studies have shown that folks who have too much clutter also tend to suffer from higher rates of depression. I don't know if this is because they're too depressed to clean, or the mess makes them depressed. Either way, I figure it's a win-win to clean up your space. Less odors, and more room to tackle the next project.

You may also find these useful: