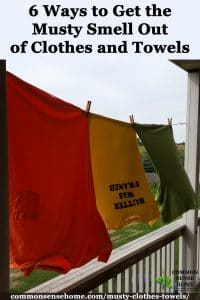 Laundry odor is something I’ve struggled with for years. With two teenage boys, musty clothes are a given. With high humidity levels in summer, we tend to end up with musty towels, too, because they simply stay damp on the towel bar. (I don’t tend to forget laundry in the washer, but that can leave an awful musty smell, too.)

Our old front loading washer didn’t help matters, either. Even with running cleaning cycles and leaving the door open, it always had a musty odor. (We replaced the unit in January and the new washer is much better. It has a drain and clean out below the washer drum.)

In this post, we’re going to discuss how to get the musty smell out of clothes and towels and how to freshen up musty closets. I’m also giving a shout out to a product line I just discovered, EnviroKlenz. It has amazing de-stinkifying power.

My eldest son love wearing gym shorts shorts made with synthetic fabric. After a while, they get a musty smell that just won’t come out. (Until last week.) He also showers in the basement bathroom – and doesn’t swap out his towels very frequently. Over the years I’ve found ways to get rid of all but the most stubborn laundry odors. (Last week I took care of those, too, which was pretty awesome! My laundry has never smelled this good.)

Let’s look at some options for musty laundry odors…

My husband’s great uncle ran a commercial laundry for many years, and he swore by white vinegar for stain and odor removal. It also helps to remove hard water and detergent build up on clothes. (Detergent residue traps moisture, making it more likely that you’ll end up with musty towels and lingering odors on sweaty clothes.) I’ve used white vinegar in the rinse cycle (instead of fabric softener) for years. Fill up the fabric softener spot (about 1/4 -1/2 cup per load) and you’re good to go. Some online guides suggest washing your musty towels in hot water with a full cup of white vinegar (no detergent) to remove mildew odor.

Another classic odor remover, baking soda can be sprinkled directly into the wash basin with your clothes. Again, I use about 1/4 to 1/2 cup per load, followed with a white vinegar rinse.

Since body odor was largely responsible for my son’s musty clothes, I figured enzyme cleaners could help break down the stink. The synthetic shorts got better, but not 100%. I had better luck with them removing pet urine odor. The BioKleen product was better than the product from the local farm store, because it was odor free. Strangely, the farm store product had a heavy, perfume-like scent. Click here to order BioKleen Bac-Out.

In the book “Talking Dirty Laundry with the Queen of Clean”, the author recommends pretreating heavy soiled musty towels with borax. To pretreat, soak towels in a tub of hot water and 1/2 cup 20 Mule Team Borax for an hour before washing. Wash as normal. Click here to purchase 20 Mule Team Borax.

I’m a big fan of line drying clothes when the weather allows. Sunlight exposure kills some odor causing microbes, and a nice breeze helps improve air flow to all the nooks and crannies. The downside of using sunlight is the bleaching effect. Over time, it will lighten clothes, making them look more worn. Sunlight also breaks down elastic and spandex with repeated exposure – like it makes plastic brittle. The odor removal power of sunlight also works much better on natural fibers such as cotton, and not so well on synthetics.

The results I’ve had with EnviroKlenz Laundry Enhancer are nothing short of amazing. The musty shorts aren’t musty anymore. They just smell clean – no perfume, no cover up. After one wash, I noticed improvement. By two washes, the odor was gone. This is a stink I’ve battled for years. (My mother-in-law told me I should have just thrown the shorts out, but he only wore them around home.) I ran around the house making the entire family smell the no longer stinky shorts.

The product is marketed as a way to get rid of chemical odors on new clothes, and to avoid picking up odors at the laundry mat, but it works great for plain old musty laundry. I’ve been filling up my fabric softener dispenser on the front loader (replacing the vinegar), adding a little extra water to help it dissolve.

I gave a cup of the product to some of our neighbors to test out on their farm clothes. They said that the butchering clothes they washed with EnviroKlenz smelled cleaner and fresher than those washed with bleach.

The EnviroKlenz product line has been around for five years, and can be purchased online and at some health care providers who deal with chemical sensitivities. I received several sample products to review for the site. (So far, so good.) It’s fairly expensive, so you may want to reserve it for stubborn odors and/or intermittent use. I’ve been using about 1-2 tablespoons per load (since that’s what fits in the dispenser) with good results. (You normally use 1/4 to 1/2 cup per load.) I’ll easily get more than 15 loads out of the 15 load bottle.

Musty Clothes in the Closet

What should you do when clothes in the closet smell musty? Sure, you can take out everything and wash it, but if you don’t address the underlying problem, they’ll just get musty again.

First, examine the layout of the closet, and look for mold and mildew. Our homes are being built tighter. Less airflow = increased mold and mildew risk.

Closet corners are notorious for harboring mold and mildew, and it can easily go unnoticed. If you find mold or mildew, you can use the all purpose spray cleaner and carpet deodorizer recipes from the DIY natural cleaners post to help clean up.

Note: If the problem is severe, please contact a trained mold remediation team. Mold spores can cause a variety of health problems. If you have a room or basement that smells musty, check out “Musty Smells in the House – Finding Them and Getting Rid of Them“.

Three DIY steps for when clothes in the closet smell musty:

These tips should help you get rid of musty clothes and towels so your laundry smells fresh and clean. For laundry stain removal tips, check out “Do It Yourself Laundry and Household Cleaners“.

Please check out these articles for more cleaning ideas:

Do you have a cleaning problem that could use some help? Did I miss a way to get the musty smell out of laundry that works for you? Leave a comment and let me know. Shares, Pins and helpful comments are always appreciated.

Previous Post: « Damaged Crops – What to Do When Hail and Wind Damage Your Garden
Next Post: Holistic Goat Care – The Owner’s Manual for Healthy Goats »