Mullein is an easy to recognize medicinal plant, with big fuzzy leaves and a tall flower spike with little yellow flowers. We'll share how to identify and use this “gentle giant” safely and effectively.

Where to Find Mullein

Mullein (Verbascum thapsus) is native to Europe, north Africa, and Asia, but it is now found on every continent except Antarctica.

It prefers dry, sandy soils, but can grow (really HUGE) in rich garden soil, and even grow in marginal soils such as chalk and limestone. You can find it in neglected meadows, forest openings, pastures, fence rows, roadsides, and industrial areas.

If you don't have access to your own plants, you can find oils and dried leaf online.

The large base leaves are 12-15 inches long (or longer) and covered with velvety hairs. When the flower stalk emerges, leaves cling directly to the stalk – there are no side branches. (As a size comparison, my shoe is a size 11.)

Common mullein is a biennial, which means that it takes two years to reach maturity. The first year of growth, the plants form a basal rosette, as shown above. The second year, plants put up a single tall flower spike.

Here's one of the plants from my garden. The wooden posts next to it were around 4 feet tall, so you can tell it was pretty big.

The plant has many small yellow flowers, each with five petals. They begin opening at the lower end of the flower spike and work their way up to the tip of the spike. Not all the flowers open at one time, so if you're collecting them, you may need to pick over the course of several days.

One plant can produce of 100,000 – 240,000 seeds, which can stay viable for decades in the soil, so I don't let them seed out in the garden. I'm sure there are enough seeds hanging around from previous generations.

Mullein has a long history of medicinal use. There are around 300 species of Verbascum, which have similar medicinal properties. Most remedies use the leaves and flowers, but some use roots, too.

Verbascum thapsus is a soothing herb with an affinity for the respiratory system. It calms and strengthens, relieving swelling and inflammation. Try mullein tea for sore throat, coughs, and chest congestion. It's been widely used to treat tuberculosis.

Try mullein flower oil for a natural earache remedy. You can use the flowers alone, or infused with garlic and/or St. Johns wort. Visit the earache remedies article for infusion instructions.

The study, “Biological activity of common mullein, a medicinal plant” tested mullein extracts for antibacterial and anti tumor activity, with promising results. Another study examined the pharmacological and chemical aspects, and found it demonstrated antiviral activity and improved wound healing.

Native Americans used leaf poultices for many different ailments, including sprains, bruises, and abscesses. Sometimes the leaves were crushed, sometimes boiled, before being applied to the injured area. It's also used for diarrhea, hemorrhoids, and as a general nerve tonic.

For a simple poultice, place several leaves in a dish and cover them with boiling water. Allow them to cool enough to handle, then place on the affected area. You can wrap the poultice with a bandage to keep it in place, and cover with a hot water bottle to keep it warm. Mini poultices are great for drawing out slivers.

How to Make Mullein Tea

To make mullein tea, add about 1 rounded tablespoon of dried leaves to a mug. (Use slightly more for fresh leaves. Rinse fresh picked leaves before making tea.) Pour boiling water to fill the mug, cover, and steep for 15 minutes.

Strain the tea through a coffee filter or fine strainer to remove the hairs before drinking. Add honey to taste, if desired. You can also include flowers in the tea, if available.

Drink the tea as needed throughout the day. Mullein has no known interactions, though you should always check with your doctor if you are on medications.

Note: This article is for general information purposes only. Please see a trained healthcare professional if you have a serious medical condition, or are breast feeding or pregnant.

Other Uses of Mullein

Romans soldiers (and others) dipped the dried flower stalks were dipped in tallow and used them as torches. The leaves were placed in footwear as extra padding and to help keep feet warm.

Mullein is sometimes used as a tobacco substitute (or smoked for medicinal use). The seeds have a history of use as a fish poison (piscicide). They release saponins, glycosides, coumarin and rotenone into the water, which stun the fish and bring them to the surface.

The leaves produce a mild irritation/redness when rub against the skin, which led to the plant being used in the Victorian age as rouge. Grazing animals don't like to eat the plant because the hairs cause irritation. This makes me question the name “cowboy toilet paper”, since I suspect those hairs would irritate your bottom, too.

Mullein can also be using for dying. KingdomPlantae states that, “The flowers make a bright yellow dye, which can be used to dye hair or cloth. The addition of sulfuric acid will produce a color-fast green. If you then add an alkali, to raise the Ph, the dye becomes brown.”

Other Names for Mullein

(There are more names, but this list is getting pretty long already. Do you get the impression this thing is pretty widespread?)

Note:  This is not the same plant as Lambs Ears (Stachys byzantina), which also has fuzzy leaves. Lamb's ear has purple-pink flowers and a spreading habit.

More Information on How to Use Your Weeds

This is post #13 in the Weekly Weeder series, which teaches you about how to use wild plants for food and medicine. you can see all the posts in the series listed on the Herbs and Wildcrafting Index page.

Some of our most popular articles include:

Yarrow – The “Plant Doctor” for your Yard and Garden

Stinging Nettle – One of Most Useful Wild Plants

Backyard Medicine is one of my favorite references for wild plants, along with any books by Samuel Thayer for edible uses. I list more of my favorites here.

This article was originally published in 2011, last updated in 2021.

Welcome to the Weekly Weeder series. Today’s featured weed is the thistle, i.e. plants of the genus Cirsium. No true thistles are known to be toxic, and they are fairly easy to identify. There are many thistle species throughout North America (and the rest of the world), but the two common in my yard are…

Welcome to the Weekly Weeder series. Today’s featured plant is chicory, Chicorium intybus. The wild and domesticated varieties of chicory have a long history of use for food and medicine, and as a forage crop for livestock. Chicory is prized for its long taproot, which is roasted and used as a coffee substitute or coffee… 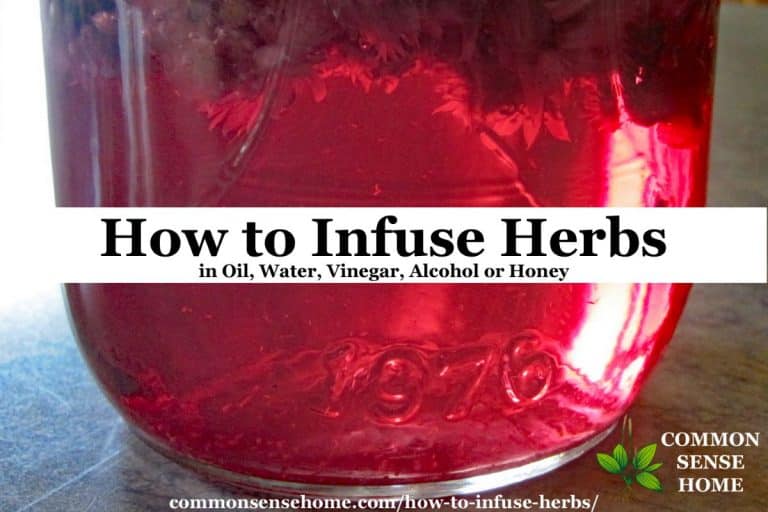 Looking for creative, easy ways to use homegrown herbs, or maybe you’ve tried some herb flavored oils or herbal vinegars and wondered about making your own? In this post we’ll cover how to infuse herbs in oils, vinegars, alcohols and honey. With just a few simple steps, you can make your own delicious flavored cooking…