Rhubarb is a perennial vegetable used for both sweet and savory recipes. The crisp, tart stalks are one of the first harvests of spring. Like asparagus, a well-tended rhubarb patch may last for decades, so it pays to start your plant out right. We’ll walk you through growing rhubarb, from planting to harvest, and share tips to keep your plants healthy producing an abundant harvest for years to come.

How to Grow Rhubarb – Preparing the Planting Area

Well-drained soil – Use raised beds or large containers where standing water may be an issue. Water logged roots will rot.

Sunlight – Like asparagus, rhubarb prefers full sun, but will tolerate light shade. (See below about season extension.) Try to plant where you have five or more hours of daylight exposure.

Fertile soil – Rhubarb plants are heavy feeders. Before you set in new plants, work composted manure or other organic matter into the soil. Don’t use fresh manure. The high level of nitrates can kill the plants.

Low or no weed competition – As with asparagus, it's best to smother weeds/clear the area before planting. Because rhubarb grows more densely than asparagus, it has an easier time out-competing weeds once established, but you'll have a healthier, more productive patch if you clear the weeds.

Establish a new patch with purchased rhubarb crowns, plants from a nursery, or a start from an older plant. As with asparagus, rhubarb seeds may not grow true to type and would take a very long time to be ready to harvest.

To take a start from an established plant, use a sharp garden spade to slice down through the crown of the plant. Do this in early spring, before the leaves start to unfurl. Lift out a section of the crown. Cut the crown into portions with at least two vigorous buds (pink knobs) each.

Plant the crowns 4 to 6 inches deep and spaced 2 feet apart in rows 3-4 feet apart. As the plant mature, the leaves will create a wide canopy. If you live in a humid area, wider spacing is better to improve airflow around the plants.

Mulch the plants with straw, leaves or other organic matter. This reduces weed pressure and retains moisture. Mulch also helps to reduce temperature swings in the soil, and keeps the plants from breaking dormancy too early and being injured by frost.

Fertilize. Growing rhubarb is growing a big, leafy green (even though we don’t eat the leaves). To encourage vigorous growth, pull back the mulch and add a nitrogen rich fertilizer such as rotted manure in early spring. Another light feeding after the harvest finishes is also helpful.

As the plant starts to fade in fall, you can top dress with some rock phosphate every couple of years to boost root growth. Do not use a high nitrogen fertilizer late in the season. The plant needs to rest for the winter.

Make sure plants get adequate water. The rhubarb plants are deep rooted and will survive with minimal water, but the stalks will be tough and bitter.

Remove flower stalks as they appear to keep the plants producing. As the season goes on, established rhubarb plants shoot up a thick stem from the center of the plant. If left, this stem will produce flowers, which triggers the plant to stop producing leaves. Twist and remove flower stalks.

To extend the season, plant some of your rhubarb in partial shade. It will start growing later in the season, but will stay tender a month after plantings in full sun have gotten woody and tough.

Rhubarb should be relocated or divided every 6 to 8 years according to the book, but I have a planting that is still holding its own after 30 years. Good care goes a long way towards crop health.

Rhubarb does not die off in winter, but it does die back to below ground level. It can be helpful to mark young plants until your patch is well established so they don’t get stepped on.

My plants don’t have many troubles – even the deer don’t bother them. Crown rot can be a problem in wet soils. It damages the buds and causes weak, spindly stems. Dig and burn infected plants.

Leaf spot appears as lesions on the leaves that cause tissue death, leaving the leaves looking as though they were shot full of holes. It’s spread by spores that overwinter on debris, so clearing out infected leaves is recommended. The stalks are still edible even if the leaves don’t look great.

When to Harvest Rhubarb

Do not eat the leaves of the plant, eat only the stalks. The broad green leaves contain large amounts of soluble oxalates and are poisonous. The stalks contain harmless malic acid. According the The Rhubarb Compendium, it would take around 11 pounds of leaves to kill a person, less than that can make you sick. It’s also best to avoid eating rhubarb stalks after frost, as the frost can cause oxalic acid to migrate from the leaves to the stems. Too much oxalic acid can cause kidney stones, abdominal pain, nausea and other nasty symptoms.

Is rhubarb safe for dogs?

Like humans, dogs can eat the stalk but should not eat rhubarb leaves. For small dogs, it's best to avoid rhubarb altogether, and even large dogs shouldn't eat a large amount. See “Can my dog eat rhubarb?” for more information.

Don't harvest during the first year of growth. Begin harvesting rhubarb the second year after planting. Choose firm stalks that are 12 to 18 inches long. Harvest the stems by pull and twisting upward and to one side. Don’t leave stubs of leaves behind. Cut off the leaves and use them as mulch in the patch, compost or to make bug spray.

Harvest may extend through spring and into early summer. (8-10 weeks) Stop harvesting when stems get thinner and less vigorous, to let the plant charge up for the next season. Never harvest all the stalks.

The first rhubarb stems of spring will be the sweetest and most tender – perfect for rhubarb pie or rhubarb pudding cake. Use later harvests in recipes that require longer cooking, like strawberry-rhubarb jam, rhubarb barbeque sauce and rhubarb-orange compote or rhubarb wine. If you don’t use your rhubarb right away, you can store stalks in the crisper drawer of the fridge for about a week.

There you have it – the basics of growing rhubarb. It takes a bit of an investment of time but you will be rewarded for years to come!

We have over 100 gardening posts on the site, listed and sorted by category on the Common Sense Gardening page.

This post is by Laurie Neverman's brother, Richard Poplawski. Since his service in the Marines, Rich has been a mechanic, fabricator and “fix just about anything” guy for over 20 years. He lives in northwest Wisconsin in the farmhouse that was owned by his grandparents, and maintains a large orchard and perennial plantings, as well as a vegetable garden. He loves spending time with his grandkids, introducing them to gardening or getting in some fishing with “Papa Rich”.

Other article by Richard include: 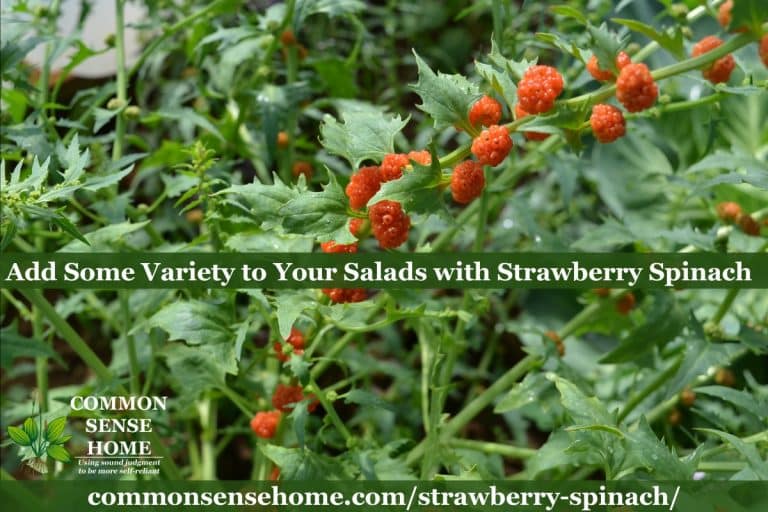 Do you enjoy trying new plants in the garden? Strawberry spinach (Chenopodium capitatum, Blitum capitatum) is a fun edible that I’ve enjoyed in my garden for many years. Both the leaves and berries are edible. I usually eat the younger leaves fresh in salads, and use the older leaves for cooking. The berries are bland,…

“Me and Jenny goes together like peas and carrots.” I always liked Forrest Gump, but “peas and carrots” brings to mind the awful institutional variety – little cubes of lifeless, washed-out orange and green that taste like tin can. Blech. The homegrown variation (thankfully) doesn’t even taste like the same food. Now, I still don’t… 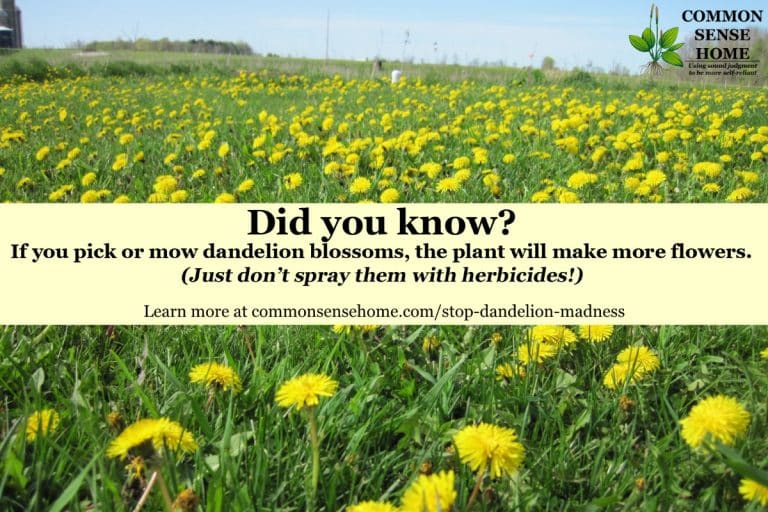 I’ve been thinking about writing this post for several weeks now, ever since I first saw a Facebook meme telling people to leave the dandelions for the bees because dandelions are one of the bees’ first spring food sources. At first glance, this sounds like a great idea. Bees like flowers, I like bees –…

We know plants don’t have ears, so how can playing music for plants help them grow? It’s all about the vibration. We’ll share what music works best for plant growth based on studies and experiments in our own garden.

In this post I’ll discuss the easiest vegetables to store and how to store them. These veggies are on my “must plant” list, because they  require little or no processing and last reliably for months. They should be a staple in every vegetable garden, or “stock up” item from the farmers market.