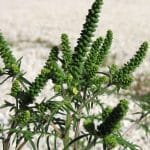 Ragweeds are common weeds that thrive in disturbed soils. Giant ragweeds can get up to 18 feet tall, but common ragweed typically ranges between a few inches and a few feet. It can hide out along the edge of a lawn or driveway, get mowed, and still manage to flower. When it does flower, it releases an amazing amount of pollen, which is the primary culprit in pollen-induced allergies in the United States.

The seeds of this amazing plant can lie dormant in the soil for over 40 years, waiting for the right conditions. Ragweed specimens are showing up that are resistant to glyphosate (Roundup), so standard weed killers won’t knock it out.

Where Does Common Ragweed Grow?

Common ragweed is native to North America, and is found throughout the United States and most of Canada (See USDA map below). (Aren't we lucky?) It has also spread over much of Europe, where it has become a problematic invasive species.

Ragweed thrives where other plant struggle – wastelands, vacant lots, aged pastures, stubble fields and other disturbed soils. It prefers full sun, disturbed and slightly acidic soil, and can tolerate (and thrive in) drought.

Common ragweed is an annual, but it produces thousands of seeds that last virtually forever. Up to 32,000 seeds have been recorded on a single plant.

The individual leaves are fern-like. It looks pretty innocent when it's small.

Ragweed plants are in the genus Ambrosia in the Aster family, which means they are related to daises, asters, dandelions, chamomile and many other flowering plants. Unlike their showy cousins, ragweeds have drab green flower spikes.

When is ragweed season?

Ragweed season peaks in fall, typically around mid-September. The pollen development in ragweed species occurs when temperatures drop below 60 and the nights get longer. August through November are the worst months for those affected by ragweed allergies.

Ragweed plants are killed by hard frosts. With some locations having later fall frosts, those areas are also experiencing a longer ragweed season.

Even if you don’t have ragweed growing in your yard, ragweed pollen is small and light. It can travel up to 400 miles on the wind, sometimes triggering ragweed allergy season in areas where the ragweed isn’t in bloom yet.

Some studies indicate that ragweed produces up to 90% of the allergy causing pollen in the United States.

If you are one of the folks who suffer from a ragweed allergy, unfortunately there is no cure. There are pharmaceuticals available to help treat ragweed allergy symptoms (some of them made from ragweed). These are often started before ragweed season hits.

In the article “Like Treats Like: Ragweed to Treat Allergies”, they discuss several historical uses of ragweed as an allergy treatment, including one from Matthew Wood’s Earthwise Herbal:

“Wood recommends that the fresh leaves fresh be tinctured 1:2 in 95% alcohol watered down to 70%. He recommends giving only one drop initially to determine sensitivity. If there is no adverse reaction or an improvement in symptoms, five to 10 drops be given every two to three hours.”

As noted above, ragweed is in the same genus as chamomile, so if you suffer from ragweed allergy, it’s best to avoid chamomile tea.

Those who are sensitive to ragweed may also suffer from oral allergy symptoms that make them sensitive to certain foods, including cantaloupe, banana, zucchini, mango, beans, celery, hazelnuts, potatoes and various other foods. Peeling or cooking these foods may help.

If you are one of the folks who is bothered by ragweed pollen, unfortunately there is no cure. I've noticed that when I watch my diet (plenty of fat to keep nasal and lung membranes well lubricated, plenty of live culture foods, less sugar), my allergy symptoms are much milder. For more help, see 15 Home Remedies for Seasonal Allergies and Hay Fever Symptoms.

Ragweed pollen counts tend to be highest in the morning, so plan your outside activities accordingly. Keep windows closed and use a good whole house filter and/or a room air filter in your bedroom for better sleep. Pollen sticks to clothing, pets and line dried laundry, so swap clothes and wash up after exposure. Skip line drying.

There is some good news for folks living in coastal areas – humidity levels above 70% cause ragweed pollen to clump, reducing the amount that goes airborne.

I found out the hard way that direct skin contact with ragweed plants can cause mild contact dermatitis, AKA ragweed rash. About a day and a half after a pulling number of ragweed plants bare handed from the side of the driveway, I woke up with a palm full of small, itchy bumps. DermNet NZ confirms I'm not the only one with this reaction. I put some plantain oil on the ragweed rash and the itching subsided.

Because ragweed and goldenrod both bloom in the fall, many people mistakenly blame their ragweed allergy symptoms on goldenrod, because the flowers are more visible. I even saw allergy sites posting photos of goldenrod and calling it ragweed while researching this article.

While it is possible to have a goldenrod allergy, it's much less common. Goldenrod has larger pollen grains that don't easily get carried on the wind – or up your nose.

Medicinal Use of Common Ragweed

Judith C. Evans states in her article “History and Medicinal Uses of Ragweed”:

Ragweed also provides aid for internal ailments. Herbalists value ragweed root tea as a remedy for nausea, fevers, and menstrual disorders; Native Americans used the root tea as a laxative. For years, Ozark herbalists have treated diarrhea with tea prepared from the leaves. Ragweed pollen is used in homeopathic remedies for treatment of hay fever symptoms.

I would suggest care with internal use of ragweed, especially if you have any type of allergic reaction to the pollen. Next time I get a mosquito bite, I may try the sap to see if it does indeed soothe the itch.

Ragweed as Food and Habitat for Wildlife

Believe it or not, ragweed is useful. It produce seeds that are rich in oil and provide winter food for birds and small mammals. Fairfax County Public schools website states that “Ragweed is a good source of food and cover for wildlife. Eastern Cottontails eat the plants, and insects, such as grasshoppers, eat the leaves. Some animals which eat ragweed seeds include: Meadow Vole, Dark-eyed Junco, Brown-headed Cowbird, Northern Bobwhite, Purple Finch, Mourning Dove, American Goldfinch, and Red-bellied Woodpecker.”

(Side note – the seeds of giant ragweed are edible for humans, too. They have 47% crude protein, more than other cultivated grains, and were once cultivated by Native Americans for food.)

Note: Ragweed gives milk an “off” flavor, so it's best to limit ragweed growth in pastures. (See below.)

In the book “Weeds: Control Without Poisons“, the author notes that ragweeds proliferate where drought and lack of moisture availability in the soil makes potassium unavailable. Hardpan, gravel, compacted soils, crusty soils are all prime ragweed territory. As soil improves, other plants will likely out-compete the ragweed.

In my yard and garden, the usual soil measures (adding compost and organic fertilizers, mulching) have virtually eliminated the ragweed. The primary spots we still see it are around the edge of the driveway, and on compacted, dry soils. For control in fields and pastures, “Weeds: Control Without Poisons” specifies: “Manage ragweed with manganese, copper, , vitamins C and B-12, calcium, phosphate and sugar in a solution. Determine quantities on site according to test readings.” The author also encourages tillage and mowing to knock back the growth.

The word “weeds” often has a negative connotation, but I think of them simply as plants not purposefully planted. They are often useful, and fill a spot where something needs to grow. (If you don't plant, Mother Nature will.)

Our weeds hold the soil in place, plow compacted subsoil, draw up nutrients, provide medicine, feed wildlife (and people) – they are a treasure, not a curse. As you tend your yard and garden and the soil improves, unwanted volunteers will either disappear on their own, or be much easier to manage.