Range and Identification of Velvetleaf

Velvetleaf is native to Asia and was introduced to America via India. The University of Tennessee Extension states:

Velvetleaf originated in either China or India. Its use as a fiber crop in China dates to 2000 B.C. or earlier. It is still grown there for fiber, which is used to make ropes, coarse cloth, nets, paper and caulk for boats. Whether as foreign material in crop seed or as an intended fiber crop, velvetleaf arrived
in North America probably before 1700, and became widespread along the East Coast by the early 1700s. Because the colonies desperately needed fiber for
rope and cloth, velvetleaf was widely cultivated in the mid-1700s. Although attempts to process velvetleaf fiber never succeeded economically, U. S. farmers continued to cultivate it for more than 100 years.

Velvetleaf is now found through almost all of North America, except for the extreme north (see map). It's found in field, along roadsides and railways, in gardens and waste areas. It's an annual with a deep tap root.

With up to 17,000 seeds per plant, velvetleaf is quite prolific. www.wssa.net explains why many farmers hate this plant and now consider it a noxious weed.

Velvetleaf seeds have tough seed coats which protect them against digestion by farm animals; in fact, experimental germination of velvetleaf seed requires scarification with 1 M sulfuric acid for 15 min or boiling for 1 min (9). Seeds can remain viable for 50 yr when stored in the soil (12); one researcher reported 43% germination after 39 yr of burial (11). The seeds and seed coats also have chemicals and microbial agents which inhibit growth of bacteria and fungi.

Because it is in the same family as cotton, it can act as a host plant for diseases and insects. Also, it have been shown to depress germination rates of other plants (see above article for more info). (Maybe it could be used as a trap plant?)

Velvetleaf plants are tall and leggy, reaching up to 8 feet tall, but most plants are in the 2-4 foot tall range. The leaves are heart shaped, and soft and velvety to the touch. In a pinch, the soft leaves can be used as a toilet paper substitute. (Do be careful – some people may get an allergic skin reaction from the plant.)  This leaf is about half as big as I've seen them get – they can reach near dinner plate size.

The flowers are small, yellow, and rather inconspicuous. You can see some open flowers on the Wisconsin Master Gardener site. I caught these late in the day so they were closed.

The seed heads are quite lovely. They are about an inch across.

The seeds themselves are small, dark and heart shaped – and very tough. They are roughly 1/8″ across.

In the U.S., the prairie deer mouse (Peromyscus maniculatus) and the white-footed mouse (Peromyscus leucopus), eat 70-90% of the seeds produced in Iowa corn fields, and likely they or similar rodents do the same elsewhere. Many insects also feed on the seeds, especially the native scentless plant bug (Rhopalidae) Niesthrea louisianica, whose immatures and adults feed on seeds of malvaceous plants. Inundative releases of this bug were used for biological control in New York and four midwestern states, resulting in a significant reduction in seed viability in the areas where it was established.

The University of Tennessee says the seeds are also eaten by mourning doves and quail.

The nectar and pollen of the flowers attract various kinds of bees, including bumblebees, leaf-cutting bees (Megachile spp.), miner bees (Melissodes spp.), and Halictid bees. Occasionally, small butterflies and skippers visit the flowers for nectar, while Syrphid flies feed on the abundant pollen. Two insects feed destructively on VelvetLeaf. The caterpillars of Pyrgus communis (Checkered Skipper) make folded-leaf nests from which they feed, while a scentless plant bug, Niesthrea louisianica, feeds on the floral buds, flowers, and seeds.

The seeds are commonly eaten in China and India. I tried some myself today. they have a rather nutty flavor, and are easier to chew than sunflower seeds. Wikipedia says the leaves are edible, but I don't always trust their info.

As always, any medical information is for informational purposes only. Always exercise caution when using any wild plants and make sure you have positively identified the plant. You can check out my favorite wildcrafting books for more help. 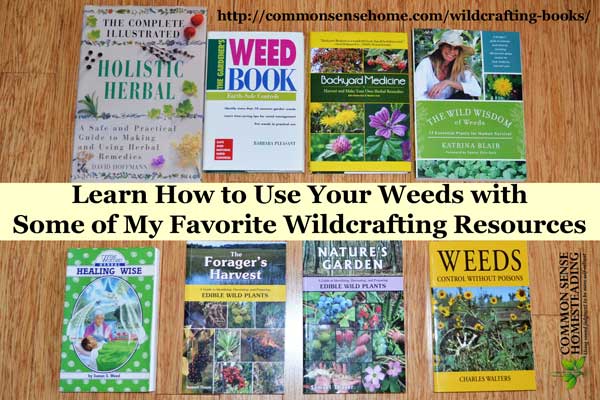 Welcome to the Weekly Weeder!  This series covers all things “weed” related – foraging, identification, wildcrafting/uses (culinary, medicinal, companion plants aspects, habitat, etc.), wildcrafting books, tips and tools to get rid of them when they are problematic. Controls must be non-toxic and non-damaging to the environment. (NO ROUNDUP ALLOWED!)

Wild strawberries are some of my favorite wild fruits, but they do have a look-alike (mock strawberries). We’ll help you find the right berries, and share tips for growing and use.