This post is for the garlic lovers – or those who aren't sure if they like garlic but do like to use natural and organic practices in their gardens. It turns out that this fragrant bulb is good for more than just cooking, and can be a real helpmate around the yard and garden. So – without further ado – 6 Ways to Use Garlic in the Garden and Yard.

#1 – Use Garlic to Protect Fruit Trees

Garlic planted at the base of fruit trees makes a great partner in your permaculture guild. Garlic and other alliums such as chives and onions have flowers that attract a variety of beneficial insects. Their strong scent also deters browsers, and may be effective as a peach borer deterrent.

#2 – Use Garlic as a Companion Plant in the Garden

From Carrots Love Tomatoes, Louise Riotte recommends teaming up your garlic with your roses and your tomatoes to keep pests at bay. She also recommends avoiding interplanting garlic with peas and beans, because alliums may slow down the growth of the legumes, but I have grown them as next door neighbors in the garden with no problems.

#3 – Use Garlic as a Fungicide

If you spot gray or white powdery spots on your plants, odds are you're dealing with some sort of mildew or fungus.  To make a simple garlic fungicide, puree 5-10 garlic cloves with a pint of water in a blender, let steep for an hour, strain, and spray on plants.  Garlic can also be used as an insecticide, so watch out for beneficial insects while spraying.

#4 – Use Garlic for Controlling Late Blight

Late blight is caused by the fungus-like oomycete pathogen Phytophthora infestans.  It was responsible for the Irish potato famine, and has decimated tomato and potato crops in different areas in recent years. We were hit with it here late in 2010. It turns potato tubers into black mush, and makes plant foliage look like it was killed by frost. Tomatoes get brown lesions and then rot. Late blight spreads the fastest in warm (60-80°F, 15.5-26.7°C), wet weather.

Typical practices to control and eliminate late blight include planting certified disease free plant starts, destroying infected plants and tubers, and treating with fungicides during the growing season. Cornell University's Fact Sheet on Late Blight of Tomatoes and Potatoes goes into more detail on identification and treatment. In the article, “Management of Late Blight with Alternative Products“, where they look at plant extracts for treating late blight, they state that:

So, even though late blight is not a fungus, it's close enough that fungicides can knock it back. I couldn't find specific dosing instructions, but the Cornell site recommends frequent, lighter applications during the growing season for general fungicides where late blight is a concern. Either the water based formula above or the oil based formula below should be effective.

#5 – Use Garlic for Pest Control – Insects and Rabbits

As mentioned above, garlic can be used as an insecticide to control a number of different insects. For pest control, use an oil base so that it sticks better to the problem bugs.

Soak chopped garlic bulbs in oil for a day or so. Strain. Dissolve fish emulsion in water. Add oil to fish emulsion/water mix. Stir well. Store in a glass container. (It will react with metal and plastic.)  To use, dilute one part solution to 20 parts water and spray directly on insect pests.

This spray may also help keep bunnies at bay if sprayed on greens that they are munching.  Bunnies generally don't care for strongly scented herbs or fish emulsion.

#6 – Use Garlic for Mosquito Control

There are now a number of garlic based oils that can be sprayed outside to keep mosquitoes at bay, such as Garlic Barrier and Mosquito Barrier. In Carrots Love Tomatoes, the author states that, “A garlic-based oil sprayed on breeding ponds showed a 100 percent kill of mosquito larvae in a University of California experiment.

Note:  The experiments seem to indicate best mosquito control with the garlic oil is applied to water surfaces or outside surfaces – not so much when applied to humans or eaten. That said, I know my friends who were big time garlic eaters seemed to get bit less – but it could be coincidence. Experiments also indicate that perfume wearers do attract more mosquitoes, so keep that in mind when enjoying time outside in mosquito season.

And that's a wrap! If you have any other ways to use garlicky goodness in the garden or yard, let me know.

Fall has begun, and we’re using a welcome respite of warm weather to continue gathering garden goodies. In this article, I share when to harvest pumpkins, how to cure them, and how to store them. 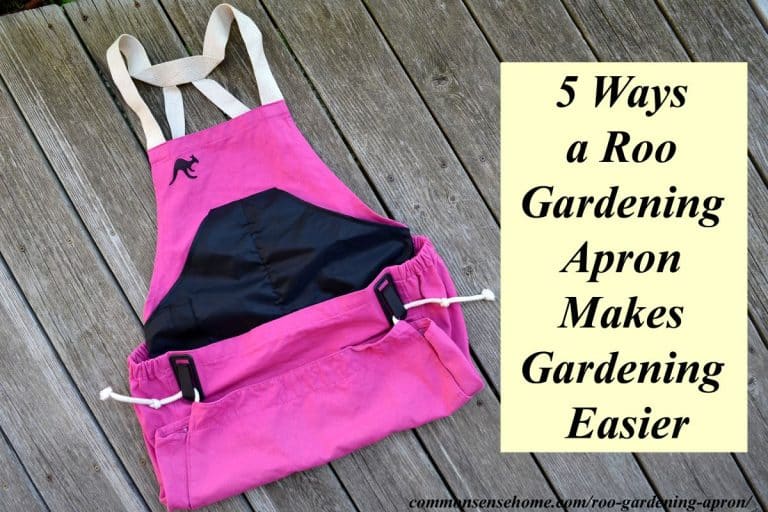 I’m sure most of us who garden have wished for an extra set of hands at one time or another, or ended up carrying a load of produce in your shirt or misplacing a hand tool. The Roo Gardening apron is a sturdy, hands free, go anywhere garden accessory to make your gardening life a…

This year I’ve been experimenting with tomatoes in containers in the greenhouse, and was wondering how to build a tomato trellis that I could move with the containers. My standard tomato trellis option using pounded in posts was not going to work. While I was thinking, I got an email from Dominic of Better Bilt…

Do you want to make compost, but don’t want the hassle of turning a compost pile, or the mess of open bins? Then a compost tumbler may be right for you. We’ll discuss which compost tumbler is best for different households, pros and cons, and how to use a tumbling composter.