Almost everyone who raises chickens for meat chooses Cornish cross, because they mature quickly with great feed conversion. A second popular choice is red rangers or freedom rangers. As an experiment, this year we raised an assortment of heritage meat chickens to see how they compare.

While the birds were beautiful and fun to watch, we'll be switching back to Cornish rocks or freedom rangers next year. I'll explain why we decided to raise heritage meat chickens, and why we're likely only doing it once.

In years past, homesteaders would raise their home flocks, keeping the hens for eggs and culling the roosters for meat. (Hens would also be culled as they got older, and replaced with younger hens.) Chickens were duel purpose by default.

Enter specialized breeding for the selection of bigger and faster maturing birds, and we ended up with today's “Frankenchickens” – the Cornish cross. These meat birds mature fast – in as little as six weeks.

The problem is that with this freakishly fast growth, the birds often end up having joint problems and other issues as they get older. You have to take their feed away at times, or they will eat themselves to death. (This may vary by hatchery.) Butchering a Cornish cross is a mercy killing, because the birds get so big their bodies fail under the strain.

Red rangers still mature fast and large, but not nearly as fast as Cornish cross. Most people choose them because they are sturdy birds and more active foragers.

We knew these two types of birds got bigger faster than standard heavy breed chickens, but we were curious about how dramatic the difference would be. We also wanted to encourage the hatchery to keep breeding heritage meat chickens.

In May, we placed an order with Cackle Hatchery for their Special Heavy Assorted chicks. We ordered 25 birds and they sent 28. All birds were healthy and in great condition when they arrived in late May.

I'm still not entirely sure of all the breeds that we had, but we did take photos so we could ID them if needed. I know there was a salmon faverolle, a jersey giant, a Rhode Island red, a brahma and a barred rock. I believe there may have been a Kosher King in the mix.

We ended up butchering the birds at just over 20 weeks of age. The average weight was 3.74 pounds – over 2 pounds less than the Cornish cross at eight weeks.

The chart below compares the slow growing heritage meat chickens with the other three types of meat chickens we're raised. The husky reds were a red ranger alternative offered by a local hatchery, but they grew out more slowly than red rangers.

As I mentioned above, the birds were fun to raise. It was interesting to see their plumage change as they grew, and the different rates of growth. (The Brahma was by far the slowest to feather out.)

They were good foragers, and did a great job of cleaning up damaged or overgrown produce and leftover meat scraps. Everyone who visited admired all the different colors and shapes. All the birds were strong and vigorous, and some of the hens even started laying small eggs.

Where they fell short was the carcass weight. Even with a LOT more time, they were still much smaller than the modern meat breeds. That's more food, more chicken poop, and more weeks of too many roosters crowing in the wee hours of the morning for less meat.

Since they were older, the meat is also tougher. You wouldn't think it would be that much of a difference, but it is. I like the firmer texture of the red ranger meat compared to Cornish cross (they taste more chicken-y), but the first bird we cooked from this crew was downright chewy.

If we needed to maintain a flock ourselves, I'd probably consider some of the bigger heritage meat chickens, like the Brahma. They have good cold tolerance, and unlike the modern “meat only” birds, they're not likely to fail under their own carcass weight.

Heritage breeds can be dual purpose chickens and good egg layers, but when you want meat birds, modern birds are more cost effective. It's also easier (for me) to butcher birds when I know their quality of life will decline as they age. Cornish cross won't make it through a winter here in Wisconsin.

We have over 100 different homesteading posts on the site, including several about raising chickens. They include:

Have you raised heritage meat birds or other meat chickens? I'd appreciate it if you're willing to share your experience or questions.

Also, hatcheries specializing in heritage meat birds or duel purpose birds, I would love to hear from you. We're planning to add a new coop with more room, and will have more room to grow out birds for a longer time.

We’re sharing some of our favorite practical gifts that people will actually use, starting at under $30. To wrap up the post, Laurie shares some tips for dressing up gifts without spending a ton of money. My wife won’t let me buy her jewelry (she rarely wears it anyway), but she does appreciate a gift…

Are meat rabbits easy to raise? Yes! Raising rabbits for meat requires just a few basic supplies and routine care. Meat rabbits are an excellent animal to teach you about a life of animal husbandry. According to RabbitBreeders.us, a single commercial doe can produce offspring to yield 300 # of meat per year! Rabbits have excellent…

Chicken nesting boxes are for laying eggs and hatching eggs, but what do your hens need to be happy? We’ll share tips for building cozy nest boxes, positioning your nests, and having enough space for all your chickens. 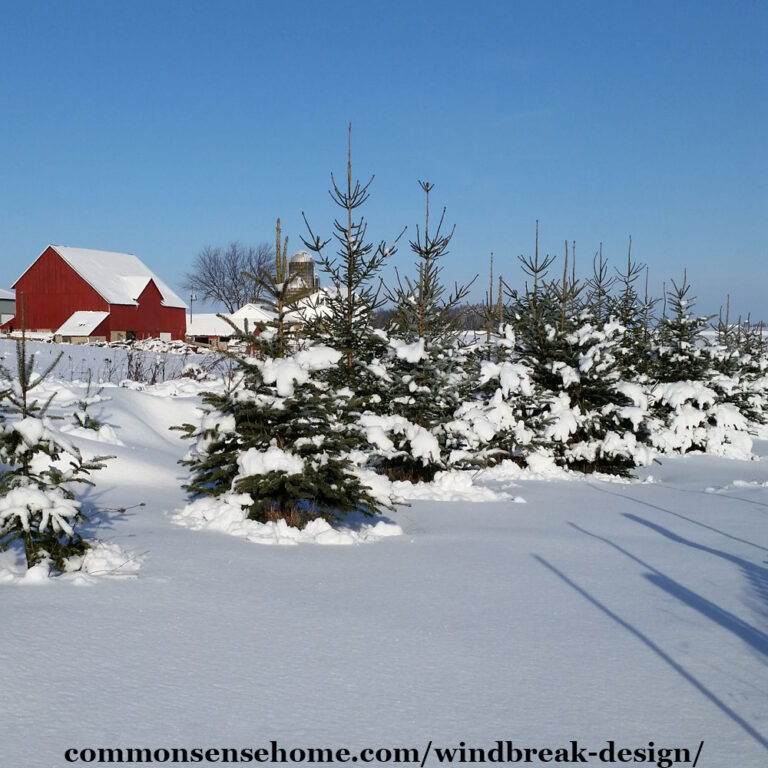 The key elements of windbreak design are the purpose of your windbreak planting, species selection, and density. Once you determine your primary goals (plant, people, or livestock protection, for example) you base the rest of your design on these goals. One planting can provide many different benefits.